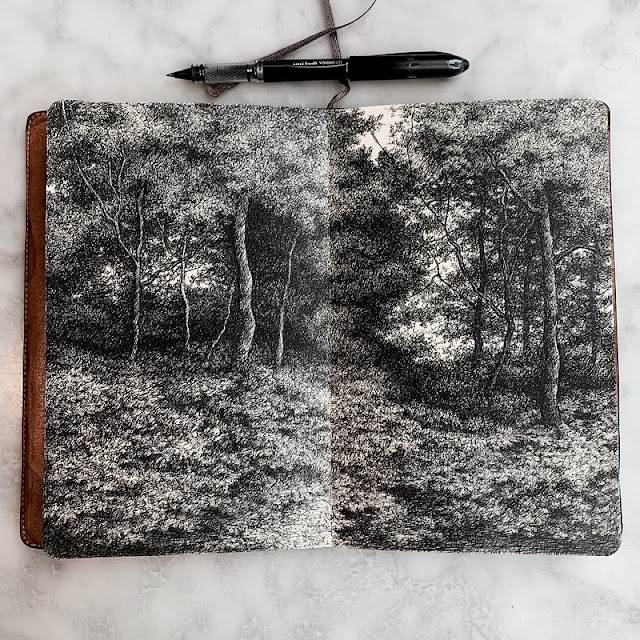 What a year it has been!  As I worked on the drawing above I had no idea that 2021 was going to be a year of hard work.  Last September I began this two page drawing while riding Metro North back to NYC from my parent's home in CT.  That summer had been the most active and fun one I've had in years.  This drawing took me right into fall as I worked on it through October, without realizing that things would get hectic in a few months. 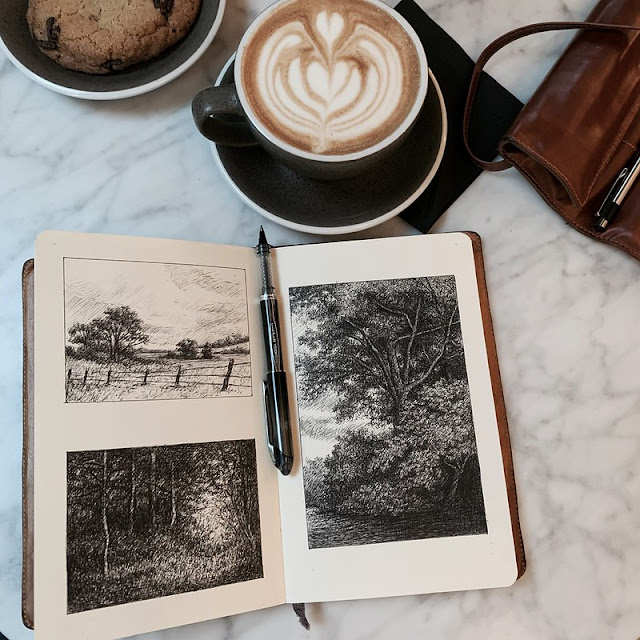 As November came around, I continued my leisurely sketching, always accompanied with a hot cup of latte.  Although things may have seemed calm on the surface, in the inside my gears were turning.  2020 had brought on the realization that my current job may not be all that secure, and that if it were to fold due to financial hardship, I would be left without a carreer or a set of skills that could be used in a different carreer/industry.  So I took a loan and enrolled in a graphic design program to give my future a better chance. 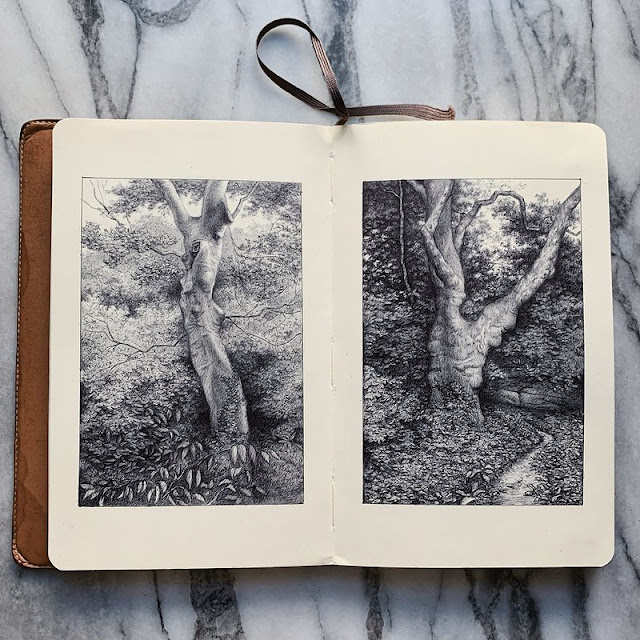 In the new year I rushed to get unfinished drawings done, such as the tree portrait on the left page, above.  I had started both pages in June and never got around to finishing, but this was the time.  In February I would start school and I knew that it would demand most of time and focus. 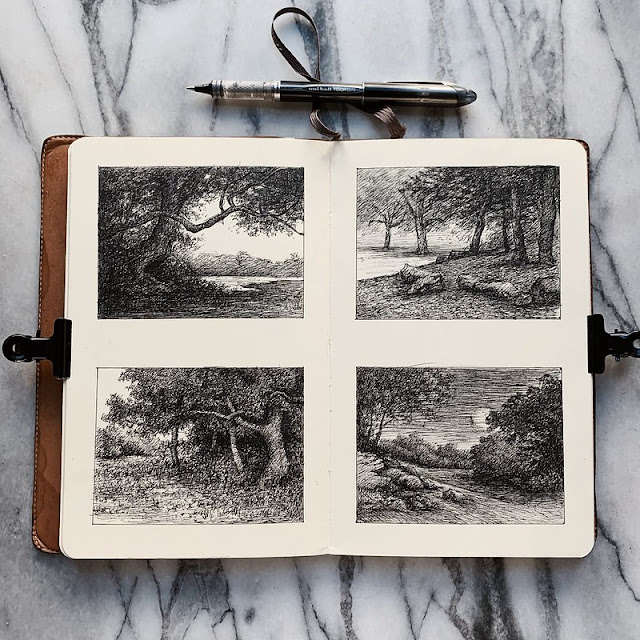 Thumbnail sketches continue to fill many of the pages in my sketchbook.  Not sure when I'll get back to a print shop to work on monotypes or etchings, but I continue to develop ideas for when the time comes. 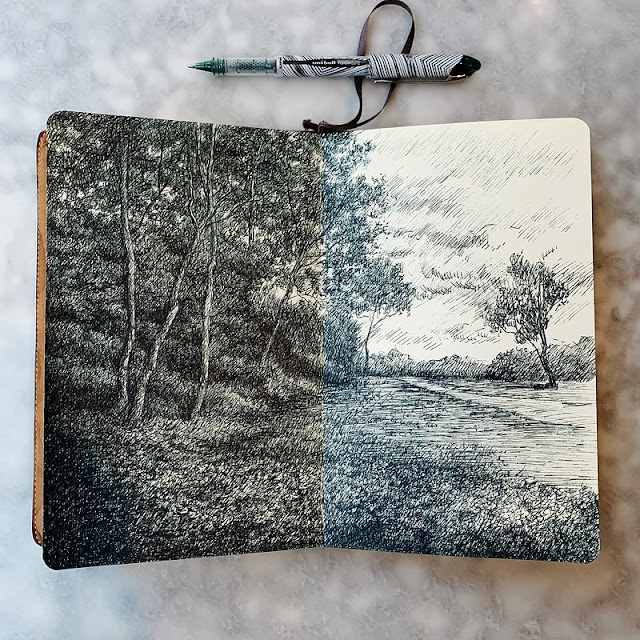 In December of 2020 I became an brand ambassador for uni-ball, one of the two brands of pens I work the most with.  The drawing above was done as a test for one of the sample pens I received.  I was intrigued by the mix of green/black ink, soemthing I had not seen yet.  The challenge here was working with a 0.8mm tip, since I'm used to drawing with a finer pen.  Eventhough I made it work, I think I will stick to a 0.5mm pen. 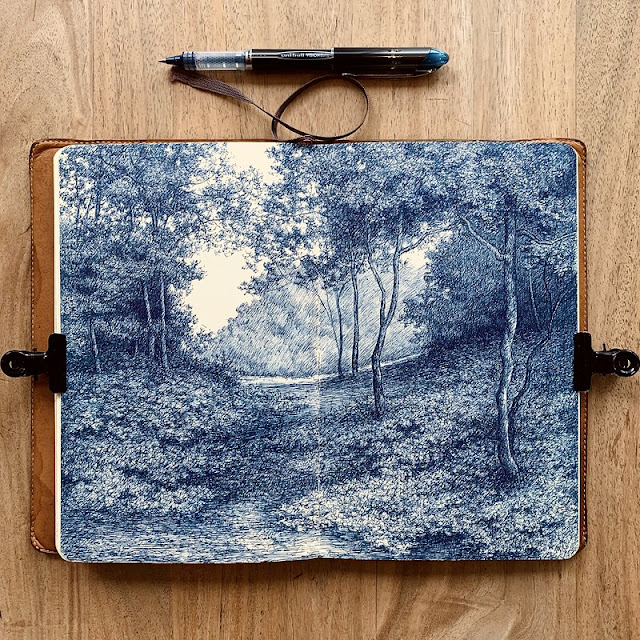 This two page drawing was part of a uni-ball instagram take-over.  I created content for them, which included progress photos, a video, and the final drawing.  You can see that Instagram post here.
Eventhough I have been busy with school, I have managed to keep my art going, which I am happy to say, it has been taking off.  This month I taught a two day workshop, and two more have been added to the calendar for September and October.  I will also be teaching a class with Zebra Pen and Michael's in the coming months.  I will make that information availalbe soon as things are solidified.  In the meantime, keep checking back as I update you current studio happenings and projects.  More to come!
Email Post
Labels: ballpoint pen drawing ink drawings landscape landscape drawing pen pen and ink pen art rollerball pen 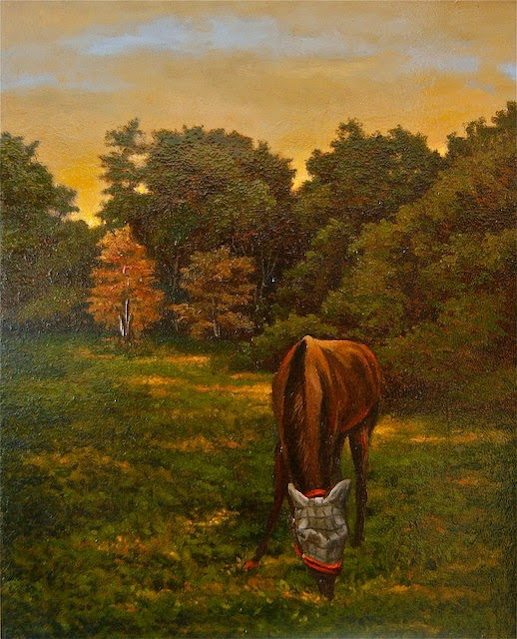 L U I S C O L A N
I moved to NYC in 2004 in the pursuit of an art career. Since then this city has helped me grow in many ways both personally and professionally. To see more of my work visit my website www.luiscolan.com or follow me on instagram @luiscolanart to stay more up to date with my process.