Portrait of Mademoiselle Henriette Ferre after Millet, 2007, ball point pen in Moleskine sketchbook
I made an unexpected trip during my Thanksgiving break to Hartford's Wadsworth Atheneum Museum of Art. This was the place where my first interests in art began and the place where I got a taste for 17th C. Italian painting. After all, this museum, which since 1842 remains the oldest public art museum in America, was the first to acquire a Caravaggio. The Ecstasy of Saint Francis has always made an impression on me. So much that I started a copy for one of my studio courses in college. But on this visit the Italian paintings collection was not on its designated gallery. The Wadsworth is very proud of this group of fine works by Italy's biggest artists, and you can't miss them as you walk into the museum. I was on the hunt for this collection thinking they had been moved to another temporary location. On my way there I passed through the first galleries, featuring 18th and 19th century French paintings. And there she was. The "Portrait of Mademoiselle Henriette Ferre" by Jean-Francois Millet. I had seen this piece many times and I was always disturbed by the unprettyness of the sitter. Her sad face always made me turn away. But with age comes wisdom I assume and on this day I was able to look past her face. For the first time the colors in this painting jumped at me. What I always thought to be a very dark and colorless painting now had a finely tuned sense of color sophistication. It's all in the dress, how could I have missed it? Her dress was an orchestration of deep and light greens. Some could even be described as muddy yellow greens, but they worked. Dashes of color ran through her garment, nothing was tedious modeling, it was all about pure painterly strokes. The more I stood in front, drawing her, the more it seemed like I had just encountered this painting for the first time. Or it could just be that after spending so much time painting in the past years I'm able to pick up on subtle painting approaches, little details that make great art what it is. Saint Sebastian after Anonymous Florentine 17th C. Painter, 2007, ball point pen in Moleskine sketchbook
Moving along the rooms of the first level of the museum I came across an area very familiar to me. It was more Italian art. This small collection of about four rooms held pieces from Medieval Times up until the 18th century. As I made my way to the last room another painting I knew so well was hanging on a corner. Saint Sebastian, a small painting by an unknown Florentine 17th C. painter, had been separated from the main group of works I was after. It was then I realized that maybe the Italian paintings were on storage, and some on loan. The Wadsworth has been going through some renovations in recent years and at one point most of their greatest hits were sent on a national touring exhibit. Knowing I didn't have much time left before closing time I quickly began sketching the small piece. This painting has always been one of my favorites in the collection and I was glad that it was still on view. I can't help but to think of Guido Reni every time I see it. As most paintings from the time this work has that sharp contrast of light and dark, a technique made popular among Italian and Spanish painters by none other than Caravaggio. But the soft features of the the Saint's face and treatment of flesh are very Reni.
Closing time came just I was finishing the sketch. I put my pen away, closed my sketchbook and walked out with a sense of relief knowing I had come back home.
Posted by Luis Colan at 6:26 PM 2 comments: Links to this post 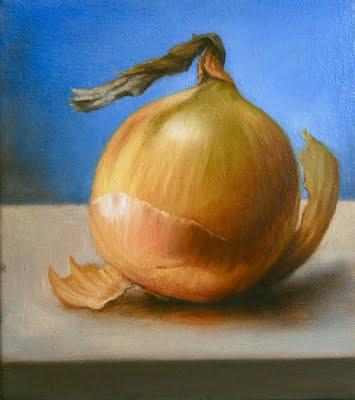 Broken Wings, 2007, oil on canvas, 10 x 9 inches
Yes it has been a while since I've actually finished a painting. Was getting worried if I should still call myself an artist or not. I feel good today, not just because of the finished piece, but because this painting made me realize something. It made me realize that I am very happy to be an artist. Things in life will always change, events will arise that could shake the very ground one walks on, but the advantage as an artist is that no matter how much life may change art will always be there. The drive and the passion to create will never stop. Painting is getting me through some changes at this moment and it's such a good feeling to find myself helping me get through it all by painting some more.
Posted by Luis Colan at 1:23 AM 4 comments: Links to this post Abstract Study No.4, 2007, watercolor on paper, 7 1/4 x 9 inches
It's back to work again. Last night I needed to let loose and have some fun. What better way than to keep working with a relatively new medium for me. It's hard to let go and try new things. I keep trying to do what I used to do with oils a few years ago. But I was glad that I didn't get to precious with these studies. I let the paint run and do it's thing. Abstract Study No.5, 2007, watercolor on paper, 7 1/4 x 9 inches
I love painting still lifes, there's a sense of connection to tradition that makes me feel good. But it doesn't compare to rush that I get when dealing with abstraction. With this kind of language you can only rely on the color and the shapes you put down and somehow make them work. There's nothing in the physical world that can be used as comparison, so the creation of an abstract piece or study is much harder yet rewarding. Abstract Study No.6, 2007, crayon and watercolor on paper, 7 1/4 x 9 inches
It was liberating to push and splash paint around. It could be frustrating too, especially dealing with the runny nature of water but you just work at it until you make it work. More to come soon.
Posted by Luis Colan at 12:42 PM 2 comments: Links to this post