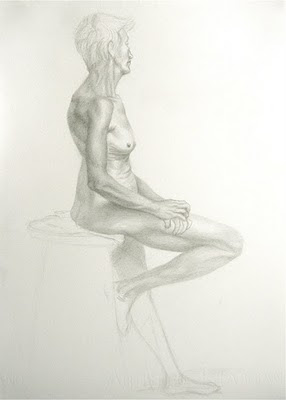 Seated Female, 2010, graphite on paper, 15 x 11 inches
This is the latest figure study from my night sessions at the Art Students League. Not bad for a two night drawing, but I could have done a little better. I used hot pressed Frabriano Artistico, a paper I've never worked with before. I was attracted to the warm tone of the Traditional White, and to the almost plate finish. It wasn't until I began to layer the pencil tones that the paper started to become a little rough, causing smudge like effects in the area where I was working most. The back of the model became smudgy and grainy, my F and 3H pencils weren't doing the trick. I had to work in a very thin HB mechanical pencil for me to even out some rough patches. It's all a learning experience, now I know what to expect from this paper and I'll be able to handle it better next time.
Posted by Luis Colan at 6:25 PM No comments: Links to this post 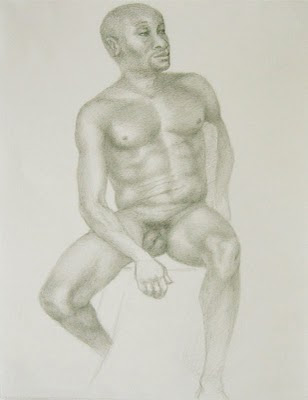 Study of Sky, 2010, graphite on paper, 13 x 10 inches
This study was done in the figure drawing/painting class I'm taking at the League. Working on a small scale does mess me up a bit when dealing with proportions and trying to fit the figure on the page. I'm too used to the 18 x 24 inch format. Regardless, I'm happy with this drawing, it's only a study, so I don't feel too bad that it didn't turn out a master piece.
Posted by Luis Colan at 12:50 AM No comments: Links to this post 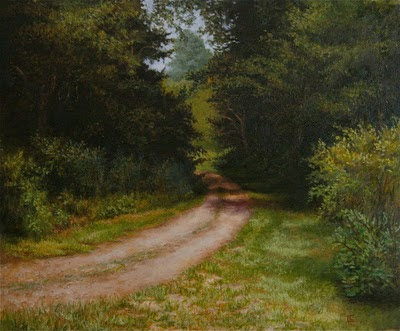 Asheville Trail, 2010, oil on linen, 20 x 24 inches
I embarked on a three week journey not knowing if I was going to be successful in creating a good landscape. I started working on this image late in 2008, and as work continued through the first months of 2009 I started seeing that I was not getting anywhere. I wasn't ready for a painting with this many elements, and yes, this much green! As with many things I'm unhappy with, I discarded it, telling myself that I would work on it when I was ready. That time came, after taking landscape classes with Robert Zeller I learned a great deal on the subject. It was time to proof myself I could do this, and a little extra push came from the possibility of earning an award for "Best Traditional Landscape" at the Salmagundi Club. Ok, so all that aside, back to the journey. Well it hasn't been easy. Most nights I wanted to tear the painting apart, but at the same time I kept seeing the end of it. It became an obsession, and the possible prize no longer mattered. I turned to landscape paintings from the past, especially Courbet, and I also turned to landscape paintings from the present. I am very well aware that I can't copy others' works, but I do hope to learn from them and take that and apply it in a way that I can develop my own voice. Asheville Trail will be exhibited in the 127th Annual Members' Exhibition at the Salmagundi Club, from November 15 to December 3. Reception and awards will take place on Monday November 22, from 6-8pm. Salmagundi is located at 47 fifth ave. (between 12th and 11th streets), NYC 10003.
Posted by Luis Colan at 12:22 AM No comments: Links to this post

A Date with Courbet 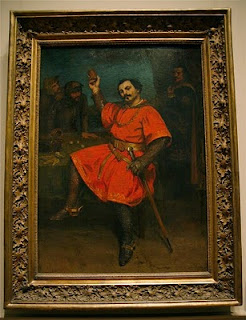 Gustave Courbet, Louis Gueymard as Robert le Diable, 1857, oil on canvas, Metropolitan Museum of Art, NY
Saturday night I rushed to the Met from work in hopes of getting at least an hour of viewing time. Trying to make it uptown from downtown on a saturday night can be a huge task, especially when there is limited time, cabs are full and trains run less frequent. I was on a mission, I needed to see some Courbet paintings. I needed to get a grasp of the way he handled paint and color. 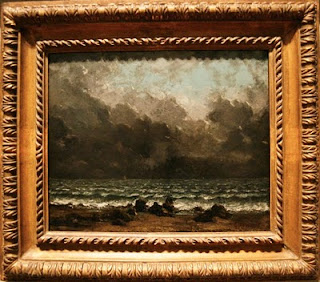 Gustave Courbet, The Sea, 1873, oil on canvas, Metropolitan Museum of Art, NY
After walking through the first galleries of 19th century French art, where Manets hang in all their glory, I came to the landscape galleries. The first Courbet I saw was The Sea, a moody and intriguing painting with undeniable energy. 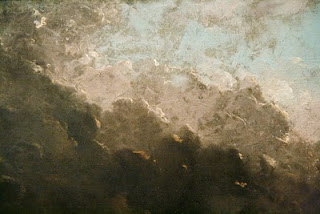 Gustave Courbet, The Sea (detail)
Courbet's use of texture is admirable, I could see his use of a palette knife in the sky, quite poetic really. 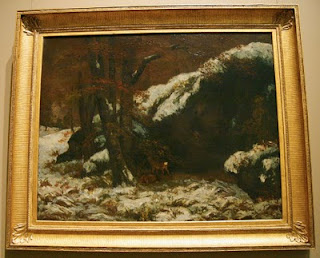 Gustave Courbet, The Deer, ca. 1865, oil on canvas, Metropolitan Museum of Art, NY
Another moody dark painting is this one of two deer. The browns in the background are rich and applied softly, a big contrast to the heavy impasto in the foreground depicting the snow covered ground. 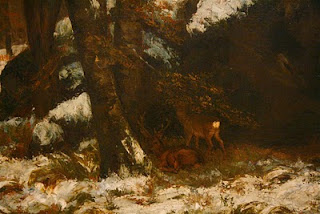 Gustave Courbet, The Deer (detail)
The deer blend in with the dark colors surrounding them, and most of the focus is on the textured snow. 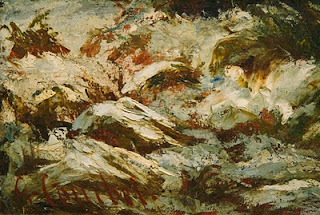 Gustave Courbet, The Deer (detail)
This is the bottom left corner of the painting, where different colors come through. 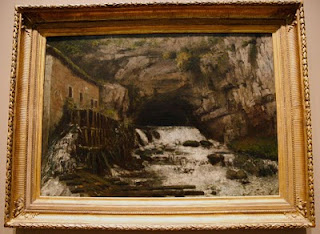 Gustave Courbet, The Source of the Loue, 1864, oil on canvas, Metropolitan Museum of Art, NY
This is perhaps one of the most stunning paintings I've seen by Courbet. There is a daring way in which he went about painting this canvas. The water of the River Loue comes cascading down to the bottom with such convincing force one can almost hear the roar of the water bouncing of the rocky walls of the cave. 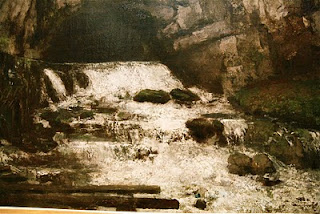 Gustave Courbet, The Source of the Loue (detail) 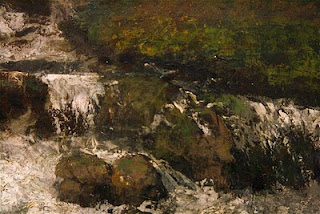 Gustave Courbet, The Source of the Loue (detail)
Looking at this canvas up close is mesmerizing, layer upon layer of paint can be seen, and what intrigues me most is how did Courbet do it? Was there a palette knife involved, or was it all done with a brush? He is unique amongst painters, his build up of paint is intense, very similar to Rembrandt's thick layers. 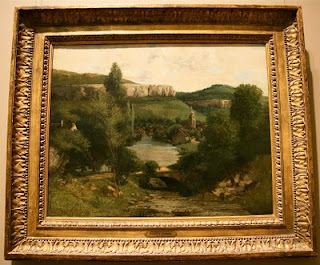 Gustave Courbet, View of Ornans, probably mid-1850s, oil on canvas, Metropolitan Museum of Art, NY
This is an early Courbet landscape, it is a bit more delicate and the shapes are more modeled, but it still has some of the paint build up I was hoping to see. 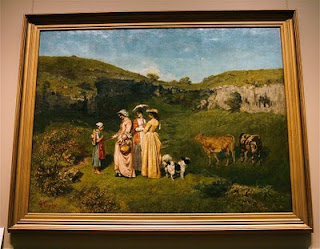 Gustave Courbet, Young Ladies of the Village, 1851-52, oil on canvas, Metropolitan Museum of Art, NY
This is the largest Courbet painting on display at the Met, and it is also a great piece. The green used on the ground is beautiful and full of light. According to the Met "when the work was exhibited in the Salon of 1852, critics bitterly attacked it, finding it tasteless and clumsy..." 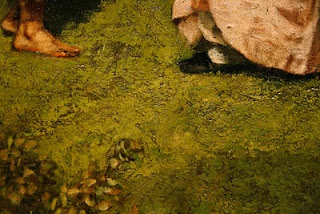 Gustave Courbet, Young Ladies of the Village (detail)
Was it clumsy because the surface wasn't pristine as Ingres? I find paintings with painterly effects and texture to be more interesting. They have more soul. It is difficult for me to believe that painters such as Courbet, Manet, Pissarro, etc., were criticized during their day, but time has been kind and they are all now seen as incredible artists. 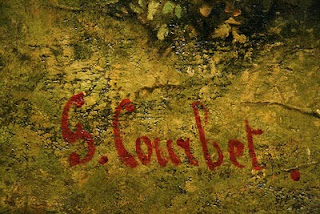 Gustave Courbet, Young ladies of the Village (detail)
Posted by Luis Colan at 4:42 PM No comments: Links to this post 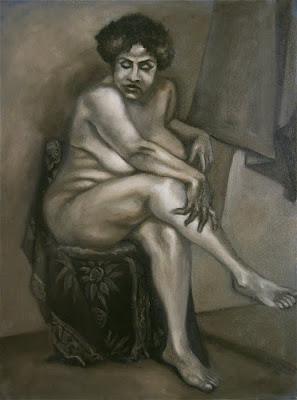 Female Portrait, 2010, oil on linen, 12 x 9 inches
These are the latest figure studies from the last couple of weeks I worked on at the Art Students League. This was originally a three week pose, but since I'm a part time student I only had a chance to work on it for only three sessions. On the second Monday and Tuesday of the pose I worked on the grisaille of the full figure. On the last Monday, I worked on the small portrait. Having only a limited number of sessions with the models is forcing me to move and see things quicker. These may not be masterpieces in the world of figure studies but hey, I'm just starting.
Posted by Luis Colan at 11:52 PM No comments: Links to this post