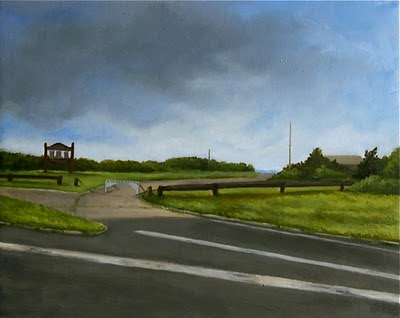 Storm Over Jones Beach, 2010, oil on panel, 8 x 10 inches
This is it, the first painting of 2010! I started this painting as an impulse, and I'm glad I did. I had fun working on this piece and it allowed me to take a break from still life painting. More new work to come soon.
Posted by Luis Colan at 10:00 PM 2 comments: Links to this post 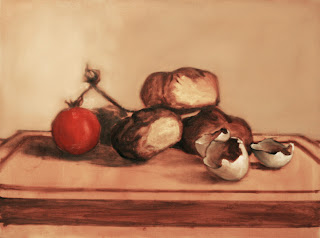 Let's get our minds out of the gutter for a second! I'm talking about the size of paintings. For a while I have been debating the importance of size in works of art. Does it always have to be big for it to get noticed or for it to be taken serious? I used to paint in large formats, but it was because the style I was working with looked better large. My still lifes have been small since the beginning, and I've kept them that way because I love the intimacy they bring forth when being viewed, but that's changing. I'm being forced, in a way, to paint larger. 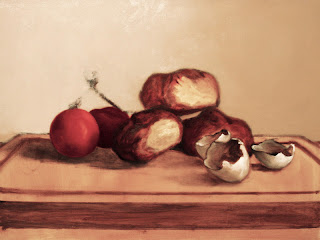 Woodward Gallery got in touch with me the other morning, and they wanted to include me in a project they have with Gourmet Garage. I will be given a show to hang in the seven windows of the fancy food store. I have a lot of work, but not big enough to fill seven windows that require a 24 x 36 inch piece each. This means that I have to come up with a number of larger pieces in five weeks. Yes, work is supposed to go up the first week of March!
Two nights ago I started this 18 x 24 inch still life. The first image is from the first night of work, the second is last night's progress. Not visible in the pictures but the work I did last night was a lot. This is the first of a number of attempts to come up with a new body of work, in a way. I'll be working non stop from now until then. We'll see if I can do this!
Posted by Luis Colan at 10:59 AM 1 comment: Links to this post 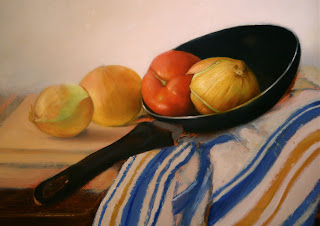 Work continues steady in the studio. I have been pushing the still life above, but this one seems to want to take its time. It wasn't such a big deal before, but now I have a deadline and I must finish this piece by the end of next month. 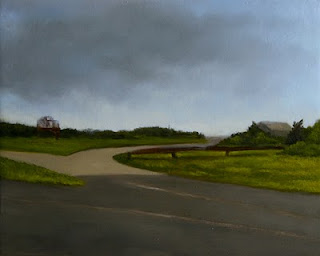 The new landscape is coming along fine. It's funny how some paintings, like the still life above, take so much time and effort, and some others, like this landscape, flow out. More to come in the next couple of days.
Posted by Luis Colan at 4:07 PM 1 comment: Links to this post 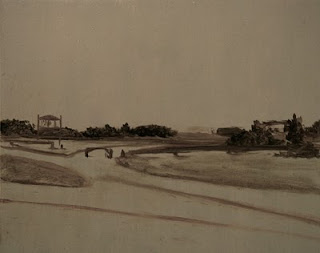 I started work on a new landscape. It was one of those impulse paintings that gets started for no reason at all, only that it has to be done. I'm working with a small scale for this landscape. I've noticed that I'm really attracted to little landscapes with vast views. I have also noticed that many painters recently are doing small works. Or maybe it's just me noticing small paintings since I work on a small scale myself. 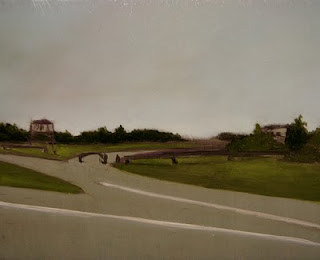 I figured out the composition and have proceeded to add a little color. Right off the bat I knew where I wanted to go with this. Now I just have to work hard to get there.
Posted by Luis Colan at 1:20 AM No comments: Links to this post 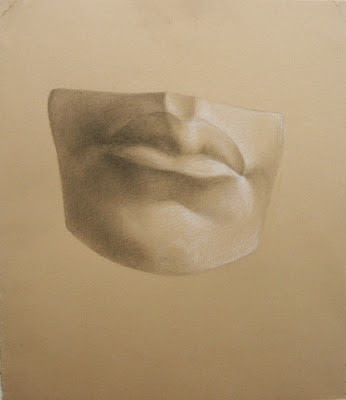 Michelangelo Mouth, 2009, graphite and white chalk on paper, 12 1/4 x 10 3/4 inches
This fall I started working with Robert Zeller on cast drawing. These exercises will help me understand proportions and values better. I started with a simple drawing of a mouth, a cast from one of Michelangelo's sculptures. There's a system to this kind of drawing. before shading begins, all the elements of the drawing have to be in place. Scale, relationship of shapes and their place in the drawing, shadow shapes, all of these have to be outlined through a careful slow study of lines. Shading begins, but also there are rules to this part. 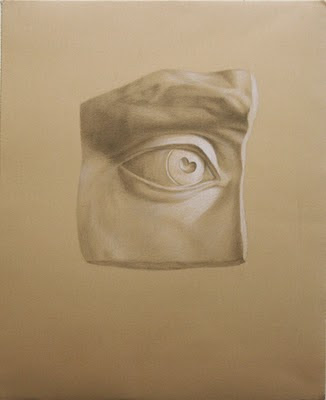 David's Eye, 2010, graphite and white chalk on paper, 17 x 14 inches
After the mouth we moved on to another Michelangelo cast, this one being David's eye. This was a bigger challenge, but through careful looking and slow drawing I got a nice product. So where do I go from here, now that I surpassed this challenge? You move on to the next bigger challenge! 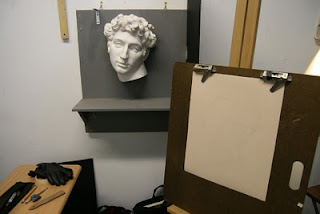 On Tuesday I started working on another Michelangelo cast drawing, and this one will not be easy! Giuliano Duke of Nemour, from the Medici tomb, is my next task; one which was supposed to be done in paint but because I thought it too difficult, I thought it would be best to draw it instead. 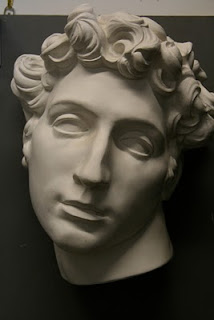 This is a close up of my little friend I will be putting down on paper. I really hope I don't mess this up, since he is too beautiful to do so. 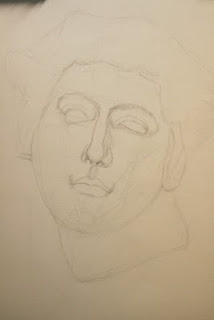 So far this is what I have. A few lines indicating angles and shapes, but this will change next class as I spend more time with the sculpture.
Posted by Luis Colan at 1:05 PM 3 comments: Links to this post 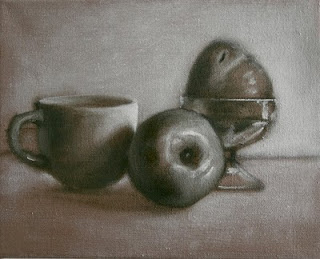 I worked more on this grisaille, but now that I know how Occhuzzie's paint feels I think I may stop and cover it up. You have to admit, this is not the greatest composition. I have to be honest with myself and push my abilities further. Being critical is not a bad thing, since it is what helps me, and every one else, grow. I many start this painting a little larger and may have to add another component to the scheme. I know for a fact this first try is not working for me. I don't like how the cup's handle is tickling the edge of the canvas. Nothing has been lost, on the contrary, I'll gain more once I start and finish a better version of this still life.
With the new year a new sense of direction and discipline has come my way. I'm spending more time in the studio than in the past few months. That's always a good thing. I feel like I have a purpose again. I've been working on the large still life On the Pan and progress has been steady and good. I'm definitely taking my time with this painting, it is important for me not to mess this up. Images on that on the way once I have more to show. I didn't get a chance to paint last night but I did spend a few hours taking an inventory of my canvas supply. Turns out I didn't have as many large sizes as I thought. That only means I have to do a little shopping! In all, getting back to work has made a big difference. I wake up in the mornings with more energy, and in the end, it makes me a happier person. Good way to start the new year!
Posted by Luis Colan at 6:15 PM No comments: Links to this post 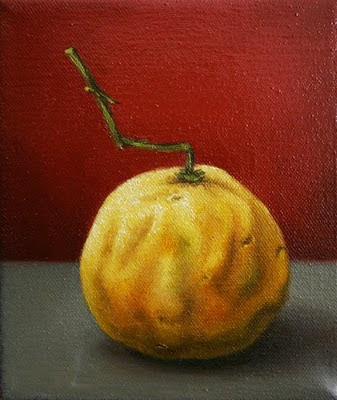 Limon Pasado, 2005 reworked 2008 - 2010, oil on canvas, 7 x 6 inchces
In May of 2005 I completed a small still life of a dried up lemon. Around this time I was getting back to painting representationally. I had titled it Study of a Lemon, I knew then that I was not really finished with it. Nothing about it was right, although I did like the small size and the subject of a decaying fruit, which is something different than the pretty and glossy onions and tomatoes I had started painting. I set it aside and after looking at it long and hard in 2008, I decided it was time to rework it. I thought the background was wrong. I changed the light grey green to a deep grey red. The surface where the lemon sat on top of changed to a dark grey. Since that day the painting has been laying around my studio, waiting for the finishing touches. That day was yesterday! I have been trying to get back into painting and I gave myself small tasks as a sort of warm up. One was to keep working on the small grisaille painting, I also covered an old panel with grey paint. This was another unfinished painting that was never going to be completed. The panel was still good so I saved it for another painting. From there I moved on to the lemon, and there was no separating me from it until I finished. I punched up the red in the background and changed the yellows in the lemon. After a short while I had something I was happy with. This may not be a masterpiece but it's still a pretty little painting to look at...I think! 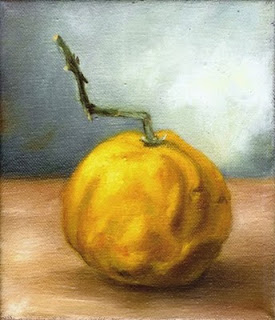