The Way I Do It 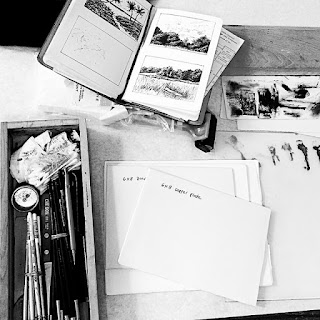 The way I do monotypes that is!  Since I have been working with this new medium to me, I have been getting questions about the process and about what a monotype is.  Monotype printing can be traced back to the 1500s to the artist Hercules Seghers, when he experimented with color printing utilizing different types of papers and linen.  In the 1600s Benedetto Castiglione and Rembrandt further advanced the technique, one that was passed down through generations of artists.  Monotype fell out of favor after these two artist, mostly because multiple prints could not be done from one plate.  It wasn't until the 19th century when Impressionist artists such as Camille Pissarro, Mary Cassatt, and Paul Gauguin were drawn to the immediacy of the medium and brought it back to life.  It was Edgar Degas though who took this type of printing to new levels.  Degas created about 500 monotypes after he was introduced to the medium by artist Ludovic Lepic.  Degas's obsession with monotype brought him to approach the medium differently, retouching his prints, mostly his ghost images, with pastels.  He also experimented with oil paint as opposed to printing ink, which added an extra layer of chance to the printing process.  Through the years after Degas other major artists picked up the process; such as Pablo Picasso, Henri Matisse, Milton Avery, Adolph Gottlieb, Richard Diebenkorn, and Robert Motherwell to name a few; each one approaching it differently and adding to the possibilities of the medium.   I was introduced to monotype in collage, under the tutelage of painter and printmaker Fred Wessel.  I was drawn to the painterly aspect of it, which suited my needs then as an abstract painter.  My process was to add color ink to a linoleum block covered in a waxy paper or acetate, and mix my colors on it and create a composition on the spot.  Since that one semester about fourteen years ago I did not work with printmaking at all, but I always kept it in the back of my mind as something I wanted to explore again.  Two years ago, through the Salmagundi Club, I was able to get back into monotype, and this time around I was deeply hooked and it has now become a major part of my artistic output. 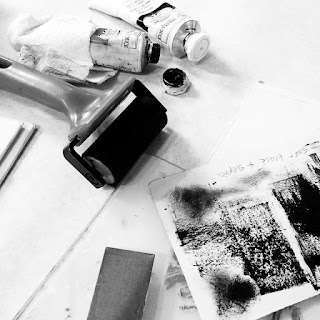 My approach to monotype is considered "dark field," which consists of a surface (in my case zinc or copper etching plates) covered with black ink.  The image is then carved out of this black layer of ink by wiping out the areas that will be white in the finished image, a subtractive process as some may call it.  In the image above I'm testing out my ink mixture on scrap paper to match the hue of the color of past prints.  I like to mix black ink with a little sepia to warm it up. 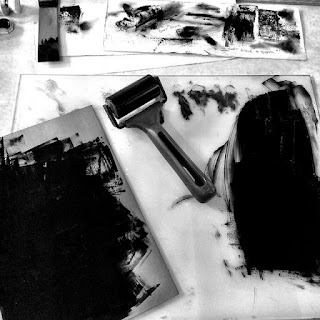 After I mix the ink and test it out on paper I proceed to cover my plate with it using a brayer.  It helps to cover the plate evenly with a flat layer of velvety ink, if too much ink is applied it can be pressed out by the etching press, causing blobs to appear in the final print. Remember to keep it tight and keep it right! 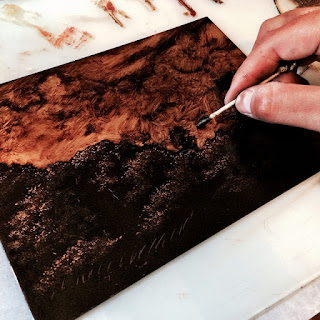 After my plate is covered I begin to draw lines with a wooden BBQ skewer, the sharp end acting like a pencil.  The bottom of a brush works just as well if you don't have a skewer.  After my drawing is complete I begin to take ink off by using various tools.  In the image above I'm working with a cotton swab, wiping away to create clouds.  You can also use rags, paper towels, or cosmetic sponges as well. 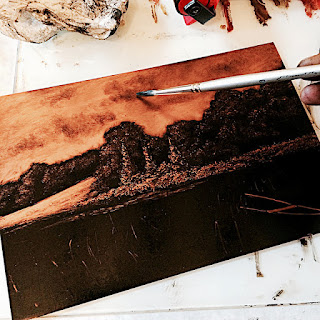 After I've wiped the desired amount of ink (in the sky) I start to blend and fines with a soft white synthetic brush, always wiping away excess ink off the brush after a few strokes.  The texture of the trees can be easily obtained daubing the shapes with a hog bristle brush.  I tend to use a filbert shaped brush, and just like the synthetic brush I like to wipe it clean from time to time to ensure that the bush is picking up ink off the plate.  For grassy areas I use either a round or flat hog bristle brush, and instead of daubing I drag it upward to give me the effect I'm looking for. 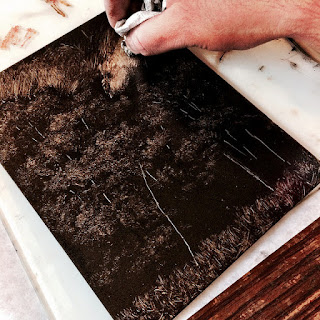 In the image above I'm working with a paper towel I bunched up.  One day, while trying to get an image going in very little time I used a paper towel and it worked like magic.  The uneven texture of the bunched up paper towel gave me the best results for groups of foliage.  To get the details on the tree trunks or leaves that reflect light in the trees I use a round tip clay shaper or color shaper, which takes away a lot of ink and gives me sharp lines. 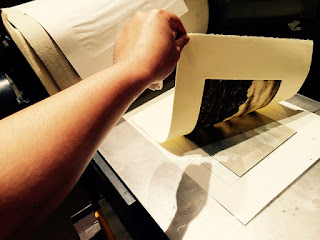 After I'm happy with my image the plate goes under the press!  You have to be prepared for surprises at this point because sometimes things print darker than expected, or some of the detailed elements that were done with the clay shaper can give you too much contrast.  Either way you have to live with the final print.  There are many other ways to create monotypes, this is just the way I approach it and the way that has worked for me.
Posted by Luis Colan at 5:46 PM No comments: Links to this post 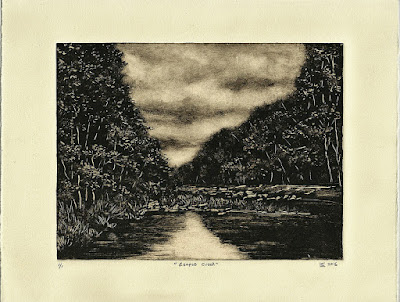 I have caught the monotype/printing bug real bad!  Painting has come to almost a complete halt, not something I want to admit but it is the truth.  I look forward to the days when I get to print, most of my energy now goes into planning and sketching for monotype days and nights at either the Salmagundi Clug or at my friend Rob's studio.  The monotypes are being well received by most people, it seems like the dark aspect of the images and their moodiness captures viewers attention far better than my colorful paintings.  There is something more mysterious about them, and that seems to really get people's attention.  It used to bother me a lot since it made me think perhaps I was not such a good painter after all, but I am learning not to fight it, so full steam ahead the printing continues. 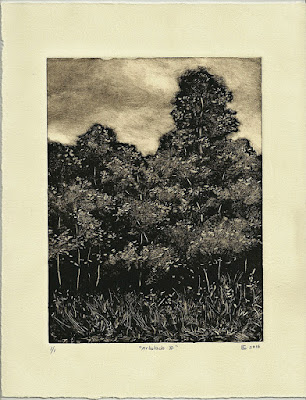 Things have started to evolve, and I'm now in the process of creating two new series of works that stem from these monotypes.  The first series is called Arbolado, a group of prints where I will be coming up with images of walls of trees that take up most of the page.  These are an exercise in imagination, speed, and my understanding of composition.  How many of these can I make without them becoming repetitive?  I have set a goal of ten, but perhaps will continue further until they develop into something more.   My approach is simple, work fast, come up with the image on the spot and let the inked plate guide me as I start making marks, and try to keep more of an abstract composition.  The image above is No.2 of the group, which I will share more of in an upcoming post. 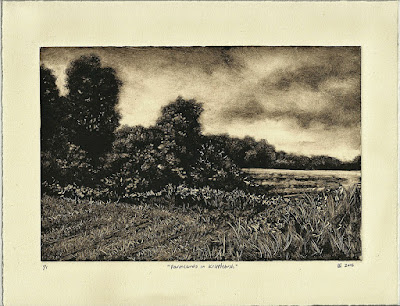 The next series involves the ghost prints I have been collecting and did not know what to do with.  Last month I almost tossed them out but decided to keep them for one reason or another.  I did not want to touch them up with pastels or watercolor in fear that I would create a mess.  Also, I did not want to copy Degas who is known for reworking his ghost prints.  But the old light bulb went off in my head the other day and I had an idea on how to use said ghost prints in a way that I could incorporate painting.  Still trying to figure out the technical side of it but soon as I get it down I will post the process and outcomes.  As always, thank you for checking in, more work to come!
Posted by Luis Colan at 5:08 PM 1 comment: Links to this post 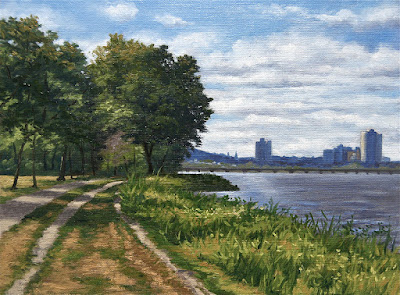 Last Thursday night was the opening of Bowery Gallery's 25th Annual Juried Exhibition, a group show in which my painting At the Edge of the Charles was included.  Juror Martica Sawin had the daunting task of going through 386 applicants work and choosing the final 39 pieces which are on display until August 20.  Here are a few images of some of my favorite pieces and of the night. 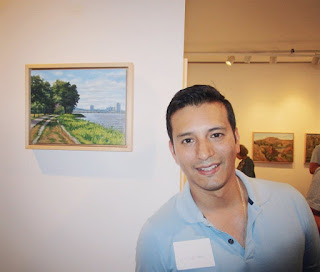 Standing next to my painting, At the Edge of the Charles, which hung right above the front desk.  Photo credit: Diane Drescher 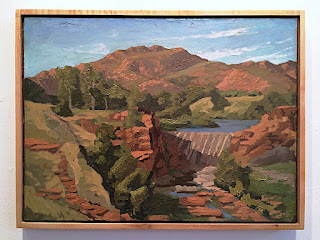 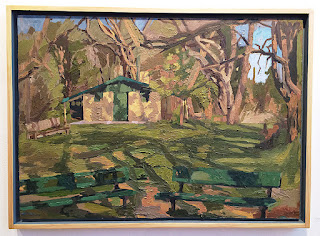 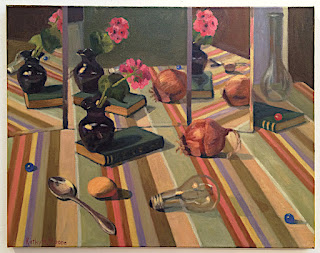 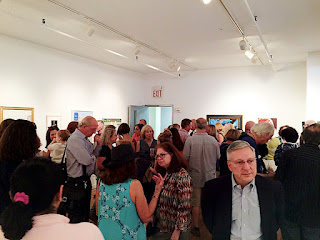 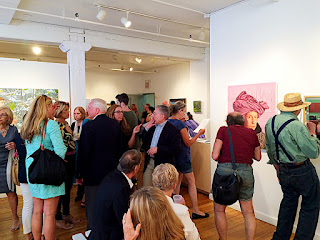 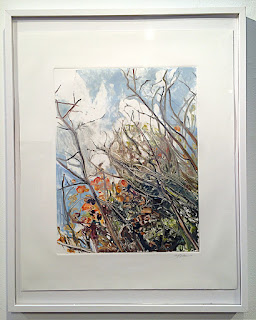 Posted by Luis Colan at 10:02 PM No comments: Links to this post