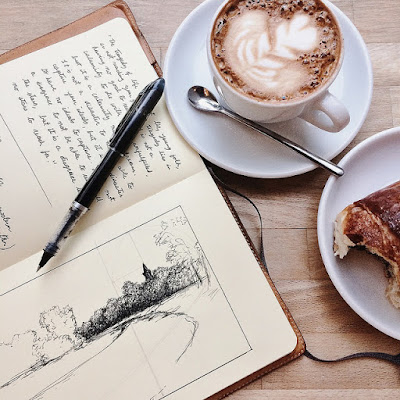 In the early years of this blog not only did I used to post more often, but I would also post a lot about my painting process.  One of the fun things I used to do once in a while was to post about my sketchbook, a tool which has become extremely important to my work in the last three to four years.  So today I'm doing something fun and posting about my current Moleskine sketchbook and how it keeps me company where ever I go in case inspiration hits. 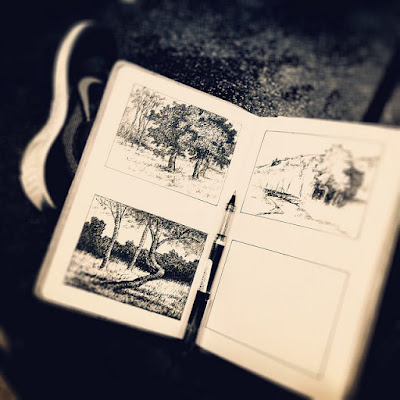 My sketchbook goes with me everywhere, doesn't matter how far it will always be with me.  Sketching in the train while commuting to and from work can be fun, I found that the motion of the subway as it rolls in the tunnels can help me make some interesting and energetic marks.  It's also sort of cool to have it out for people to see, you never know who is watching. 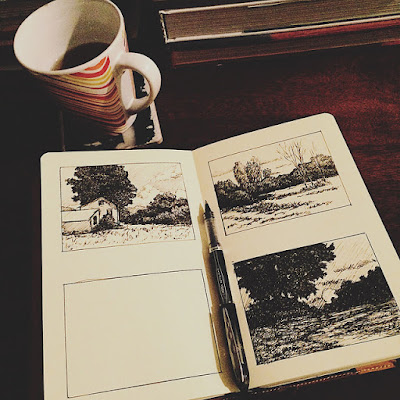 If I'm not feeling like painting and find myself stuck on the couch watching TV, this guy comes out to keep me and my cup of tea some company.  This also tends to alleviate some of the guilt I might be having for not getting any work done in the studio. 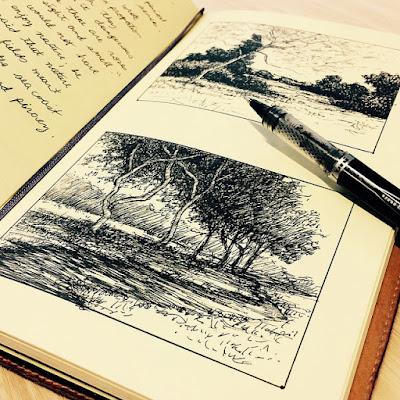 Since I began working on monotypes my sketchbook has become an extremely important tool.  About 90% of all my landscape sketches now are done from imagination, working out mostly compositional ideas for future monotypes.  I only get to print about once a month and my time at the press is limited so there is no time to waste, I have to be prepared with a number of sketches to work from. 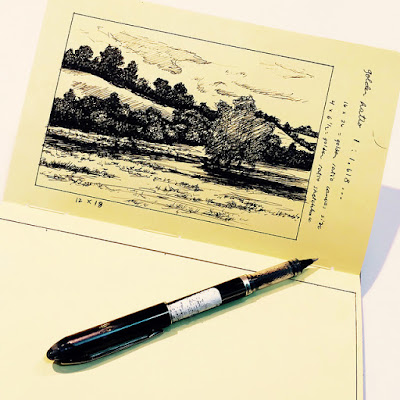 If I'm  not working from imagination I'm working from reference photos of places I have been to, like this drawing which is from a snap shot I took in Ireland a few years back.  Ireland...talk about inspiration! 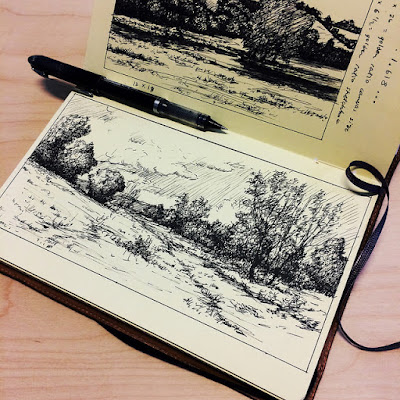 Not all of the sketches will end up as monotypes, some are ideas for paintings such as this drawing on the bottom.  In case you are wondering, this one is from imagination. Nothing like enjoying the day with a glass of wine, sunshine, and a sketchbook on hand. 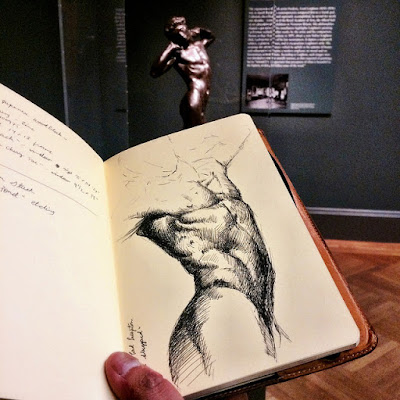 My faithful Moleskine definitely comes with me to the museum.  I'm so lucky to live in a city full of world class collections, the Met. and Frick being two of my favorites, and there's nothing like sketching from all the beautiful works of art on display in the galleries. 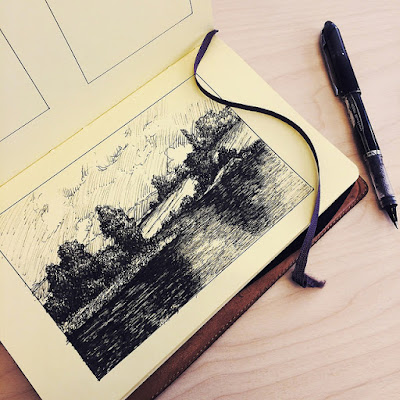 The other tool that's always at hand is my pen.  Almost all my sketches are done with a black pen, these days I'm using Uni.Ball Vision Elite.  I'm not sure when or how I came across this pen, all I know it was love at first sight, or should I say mark.  The reason for using pen was out of necessity.  After purchasing my first Moleskine sketchbook in 2006 I quickly realized that the paper was too smooth for pencil.  As a matter of fact the paper almost rejected the graphite and would transfer over to the facing page, which was not good when all the drawings lost their details and became big smudges.  Since then Moleskine has changed the paper to something lighter, not as yellow, and with a little more tooth which makes it suitable for pencil work.  But over the years I have bought so many Moleskine sketchbooks that I'm set to working this way for a long time. 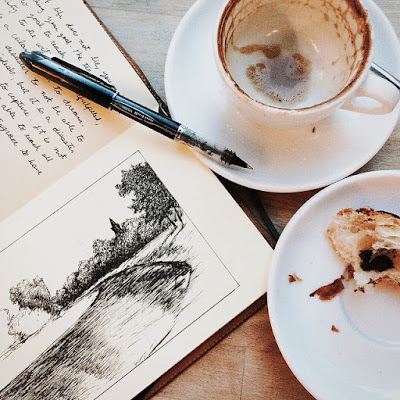 Oh, and the Cappuccino and Chocolate Croissant at the beginning of this post was so good.
For older posts on my sketchbook click here.
Posted by Luis Colan at 5:27 PM No comments: Links to this post