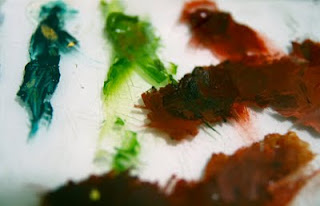 I have been doing a little bit of work on my first tromp l'oiel of roses. So far no major breakthroughs, but the progress is steady and without problems. I'm expecting to have some technical issues once I get to the photo booth strip behind the roses. I am not an expert in portraiture, especially miniature size, so this poses to be a huge challenge. 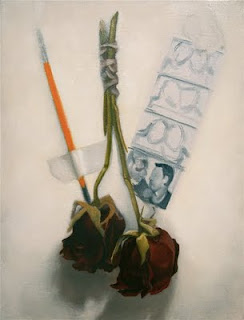 I began blocking in the photo strip, but most of my attention has been on the roses, which are a very deep grey red. These are a couple of 1 year old dried roses and they have lost their deep red intensity, but still remain dark, almost brown and burgundy. I'm beginning to see that recreating the texture of dry roses is a trickier than I anticipated. Never the less, I keep working, trying to pull it together. 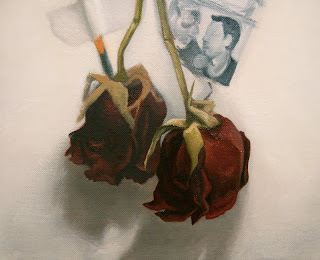 This is a close up of tonight's work, which has been on the rose on the right and stems. More to come soon.
Posted by Luis Colan at 1:35 AM 1 comment: Links to this post

A Drawing of Anna Anna, 2011, graphite on paper, 11 x 15 inches
Meet Anna, the most recent figure drawing to come out of the Teaching Studios of Art in Brooklyn. This was March's pose, and just today I had the chance to photograph it. I'm learning so much as I do these one month poses, and with Anna the subtleties of her soft curves presented a big challenge. Light hit almost evenly throughout her body, making it difficult to identify muscle areas. I had to emphasize the shadow running on the left side of her body a lot more to get some sort of drama in the drawing. Perhaps the most difficult areas for me were rendering the foreshortening of the hand and of her feet. The hand had to be redrawn about four to five times, and thanks to Adam Miller I was able to grasp the concept of simplifying things to geometric shapes. I wasn't able to complete the drawing, but I did get the most important information down to make it a good looking one. At the moment I'm working on another month long pose, I will post it as soon as the month is over.
Posted by Luis Colan at 11:43 PM No comments: Links to this post

Drawings from the Met 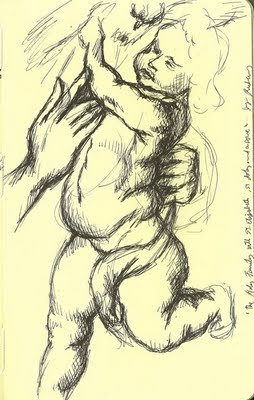 Christ Child after Rubens from The Holy Family with St. Elizabeth, St. John, and a Dove, 2009, ball point pen in moleskine sketchbook
My trips to the Met Museum continue, it's a place where I find peace and inspiration. I always bring my moleskine sketchbook with me, at times I come out with about three drawings in one visit, and sometimes none at all. It all depends on my mood I guess. When I visit I don't go in with ideas as to what I'll be drawing, it always happens by surprise, when standing in front of a work of art automatically drives my hands to respond by pulling out my pen and sketchbook. Such was the case with the drawing above, a quick sketch of the enchanting Rubens. His work always captures me, there is some much movement in his paintings, and in this sketch I was trying to capture that kind of movement happening in the body of the Christ Child. 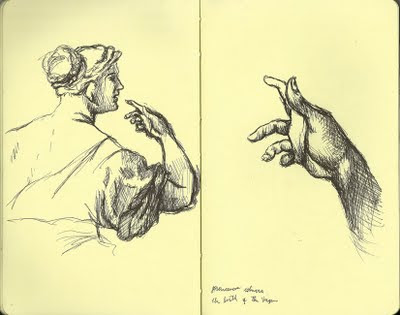 From the Birth of the Virgin after Francesco Solimena, 2009, ball point pen in moleskine sketchbook
I'm usually happy with my sketches, specially since I'm drawing with an unforgiving tool such as a pen. There are times though wen I fail, and the drawing above is a testament to this. I don't know what happened here, perhaps I was drained from looking at so much art, but the bottom line is that I drew it, and badly. The Birth of the Virgin is one of my favorite works in the Met, the size of this painting is very large and the composition has so much going on. I couldn't choose which part of the painting to draw, and so the figure that was closest to me seemed to be a good choice. What I found interesting about the this figure was the way her arm went back in space into a shadow area, her delicate hand catching some light at the finger tips. I heard somewhere that if you can paint or draw and hand correctly you can pretty much execute anything. I don't think I was ready for that test yet as this drawing shows my lack of ability to draw a good hand. It's all a learning experience though, we all learn from our mistakes. 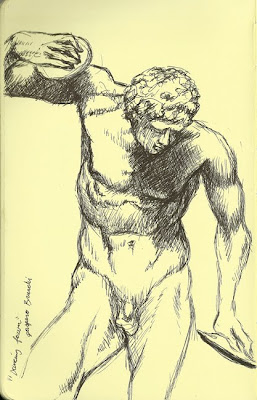 Dancing Fawn after Gaspero Bruschi, 2009, ball point pen in moleskine sketchbook
This Dancing Fawn has a little story behind it. Previously, in 2008 to be exact, I found this beautiful male nude sculpture by Gaspero Bruschi in one of the little galleries tucked away in the first level of the museum. I drew it in my sketchbook then, sometime later at the end of the year by messenger bag was stolen from a Bar/Restaurant in Manhattan. In that bag was my moleskine sketchbook containing the first drawing of Bruschi's sculpture. I never had a chance to scan the drawing, and now it is lost forever. In 2009 I went on a scavenger hunt in the Met trying to find this piece again so that I could draw it. Eventually I did and here it is, the new Dancing Fawn. 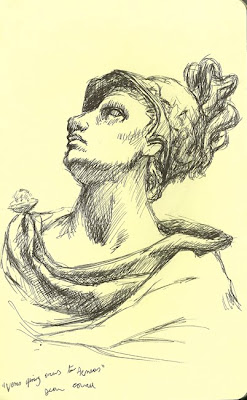 Venus Giving Arms to Aeneas after Jean Cornu, 2009, ball point pen in moleskine sketchbook
Next to Bruschi's sculpture was another breathtaking piece by sculptor Jean Cornu. It was the three dimensional equal to a Rubens painting with Venus floating on the top coming down to face Aeneas, as he looks up curving his torso backwards. I drew Aeneas' face, it reminded me of the ideal male beauty established centuries ago by Michelangelo with his David and with the depiction of Adam the Sistine Chapel. 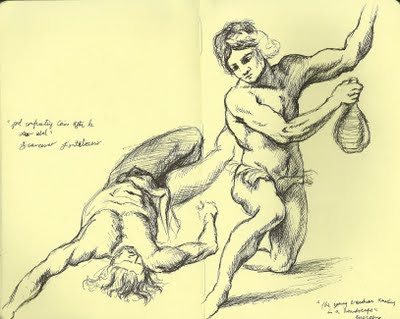 Left: God Confronting Cain after He Slew Abel after Francesco Fontebasso; Right: The Young Bacchus Kneeling in a Landscape after Guercino, 2010, ball point pen in moleskine sketchbook
These two drawings were done on a visit to one of the recent Met's exhibitions on Italian drawings. I forget what exhibit this was, but I can assure you it was incredible. Portrait of a Man after Workshop of Velazquez, 2010, graphite in moleskine sketchbook
It is very rare that I draw with pencil in my sketchbook. the smoothness of the paper doesn't allow the pencil to remain in place too long, reason why I draw with pen. I have been venturing into using pencil and I don't mind the look, but what I have noticed is that it takes twice the amount of time to do a pencil sketch than with a pen. Pencil automatically makes me get very detailed, and I become obsessed with shading. This is the second time I've sketched Portrait of a Man, but this time around it turned out better. In this drawing I can see my growth in drawing, I admit once again, cast drawing does help tremendously! To see the first drawing from 2007 click here.
Posted by Luis Colan at 1:52 PM No comments: Links to this post 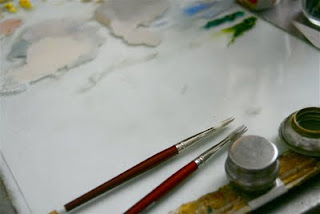 Work continues in the studio as I await the arrival of spring. Time is flying by, we're almost at the middle of the April and all I've accomplished is one small still life. I'm trying to finish a few things before the lazy summer days begin. 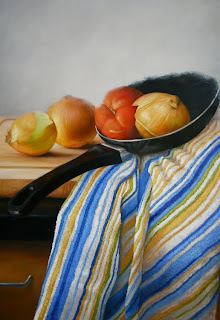 I have been working on this still life, and the closer I seem to get to the finish line the more things I need to tweak. There was something off with this painting, and thanks to someone very dear to me, I was made to see that the background was too bright. It was competing with the the objects on the counter. I toned the white background to this light grey, and immediately I saw the painting change for the better. I was supposed to finish this piece more than a week ago to get it ready for a show entry, but things don't always go as planned. At least now I have the frame ready, waiting to be installed. 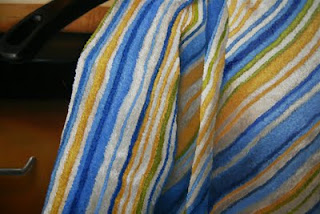 This is a close up of the towel. I have been working hard on this, building texture and trying to capture the soft changes of light that take place throughout. The left side is more finished than the right, but no worries, I'll get it all to look even. 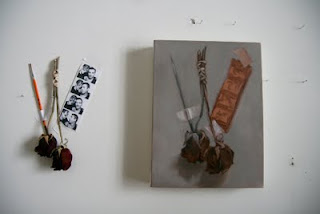 I recently started working on this tromp l'oeil, my first, and so far I'm happy with what I see. I have been noticing that my drawing skills have been getting better, and I'm also getting better with my value range. I guess cast drawing once a week for almost two years is paying off. 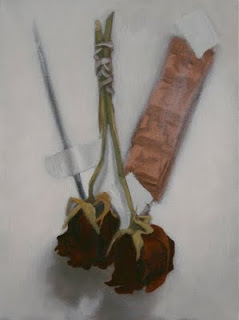 This is the first layer of color, although the camera didn't catch it, there are a few light areas on the roses. I'm also learning from my mistakes, reason why I'm trying not to add too much white to the wall. I've been using a color call Zinc Buff by Williamsburg, I have to admit I have been obsessed with it for a number of years. Its rosy warm tone allows me to have bright areas that are not too cold or harsh. More to come.
Posted by Luis Colan at 10:01 PM No comments: Links to this post