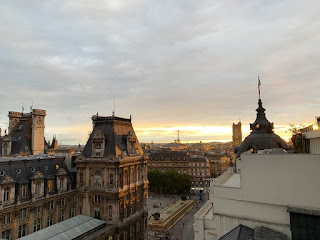 I'm finding it hard to believe that a month ago I was in Paris!  Yes, four weeks ago I crossed the Atlantic to spend three days in Paris and six in Provence, and till this day I'm still processing everything.  On the first night Paris gave us a beautiful welcome with this stunning sunset.  I thought I was walking inside the Janet Jackson music video Come Back to Me. 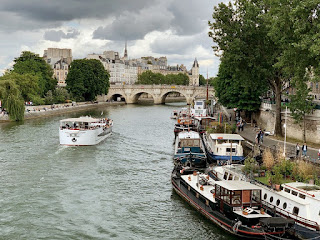 Paris is a very large city with lots to do and see, the art alone requires many hours of attention, but we tried to cram it all, or at least most of it, in three days...YIKES! 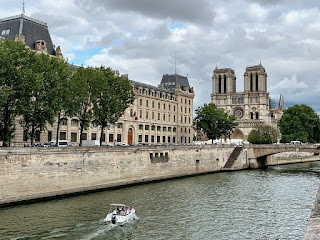 We walked by Notre Dame a number of times but to our bad luck the area had been closed off, it was my understanding a day or two before our arrival the streets leading up to the cathedral were open.  We got to see her from across the Seine, and even though she's missing her spire, she still stands tall with grace. 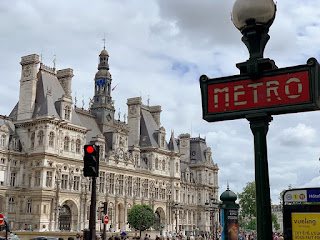 Why not take a picture of the metro sign, it's Paris after all and that sign is unlike any other in the world.  Wish our subway signs in NYC were as artistic and charming as this one.  Do you hear that MTA? 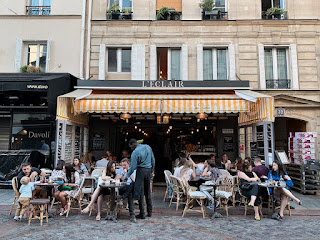 Ah the cafes, there were endless amounts of them, and all buzzing with locals and tourists alike enjoying either coffee or wine.  Parisians take their cafes seriously, it's definitely a see and be seen lifestyle.  Chairs are set up facing the street so that those enjoying their drink and conversation can also people watch as they pass by. 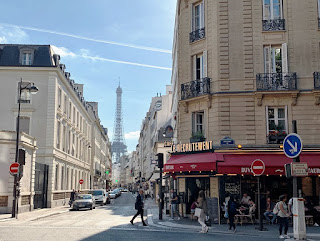 One of the things I noticed about Paris, and France in general is that it is a very social city.  Everyone is engaged in conversations paying attention to each other.  I rarely saw someone on their phone either texting or having one of those loud annoying conversations.  It is all about the here and now and who is across from you at the moment. A misconception about Paris is late dining.  I've been to Madrid and Barcelona, and small towns in Italy where late dining is the thing.  Not in Paris, here you dine early because most restaurants close at 10pm, if you are not requesting your table at 9pm then you may be turned away because kitchen closes soon.  We did find this eatery close to 10pm and had no problem ordering our dinner.  And if you're an American used to the "let's serve fast and turn tables" kind of service than you are in for a shock in Paris.  There is no quick service, no one is trying to rush you through your meal, the table is yours for as long as you want it.  It's nice to enjoy your dinner or lunch at a nice pace but sometimes these can take two hours maybe more. 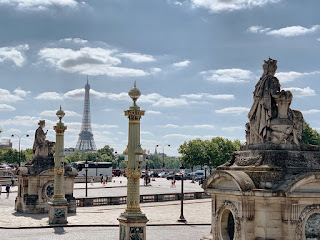 Daylight in France is glorious, sun is intense and the amount of hours of it is quite astonishing.  At 6 a.m. the sun is out at full force and it does not go down until 9 - 10pm.  If we had that sort of thing here in the East Coast I think I would get more done with my day. 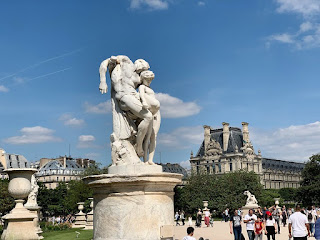 After a month I'm beginning to feel the need to go back and explore some more, hopefully the second time around I get the insider tour from a local.  I can imagine the little spots that only the people that live there know about. 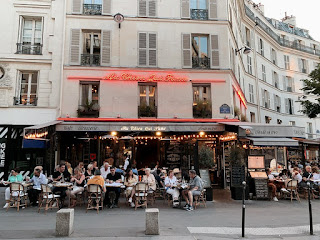 More to come about my trip to France, in the meantime enjoy these photos.
Posted by Luis Colan at 5:58 PM No comments: Links to this post