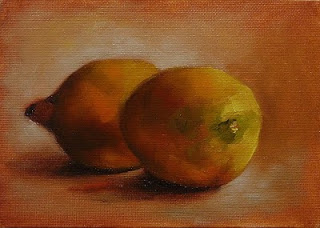 Study of Lemons, 2006, oil on canvas panel, 5 x 7 inches
Work continues in the studio on old paintings I haven't finished from the previous year. It can be hard at times for me to focus on one piece, sometimes my mind keeps running with different ideas for paintings, and when all these come to mind at once I feel overwhelmed by their bombardment. I was finally able to clear my head the other night and I decided to start a new painting. I started going through all my reference photos I took in 2005, yes I have images and ideas that go back that far. I opted for a simple still life of lemons, a cup of tea, and honey. As it turns out I had already started work on this in 2006 when I made a little study of the lemons (above) of this composition. 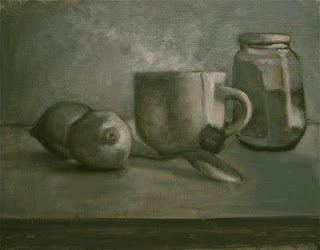 For this painting, I began by laying down shapes and tones using unbleached titanium white and raw umber. This grisaille is a little more developed than what I'm used to at this early stage of painting. Usually I lay down a quick rough sketch using burnt sienna and burnt umber, but here it is and I think I like working from this starting point. 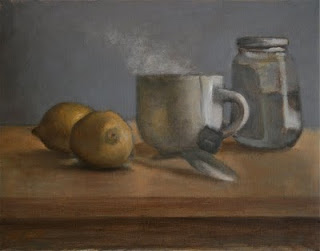 Day two of the painting; I began working in some earth tones, I'm trying to stay away from prismatic colors in the early stages. I'm hoping the warm, dark, and grey tones of the earth colors will give me a nicer depth once they start to come through the brighter colors I will glaze later . At this point I still don't know what to make of the background. To me the background is one of the most important elements of the painting. 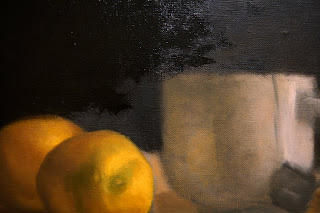 Day four of painting; as can be seen from this picture, I made the background black. I see this painting as a night still life, something inspired by 17th century Italian and Spanish paintings. I'm going back to my roots as a painter in this one. I used to paint still lifes with dark browns and blacks in the background, it's been years since I've done this and I'm afraid I might be setting myself to fail. The picture above shows the two layers of back, on the left the new layer with a bit of oil medium, on the right the dried black applied with straight turpentine. I'm using mixtures of browns with the black so that the color doesn't appear flat, as I keep working the background, I will glaze viridian and alizarin crimson with black to give me the richest black possible. I have also started working on the lemons, adding layers of raw sienna, ochre, indian yellow and lead white. By the end of the fourth painting session I can start to see the light at the end of the tunnel and so far I like what I see.
Posted by Luis Colan at 12:30 AM 3 comments: Links to this post