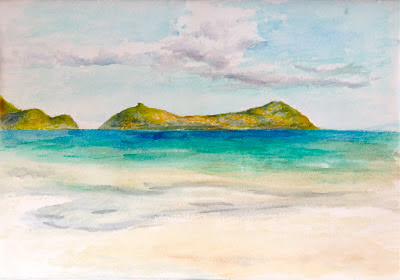 Ilet Pinel, 2012, watercolor on paper, 6 3/4 x 10 inches
While sitting in the beach of Orient Bay in St Maarten working on these watercolors, little did I know that after landing in the States I would have to get ready for a hurricane! That kind of weather is common in the Caribbean, but not here in New York, which makes this situation funny to think about since the storm was brewing not too far north from us on a neighboring island. As "Frankenstorm" was taking shape in Jamaica, I was enjoying the sun and water of the "friendly island." 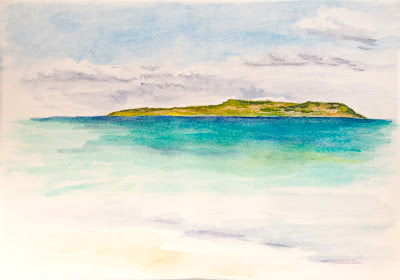 Cayes Verte, 2012, watercolor on paper, 6 3/4 x 10 inches
I really wanted to take my oil paints with me, but that also meant that I needed to travel with my field easel and a number of canvases; somehow that idea didn't sound practical. Not to mention that there might have been a risk of my paints getting taken away by airport security. Plan B was to take two watercolor sets and sketchbook, which I wasn't so excited about, but a few watercolors and days later I think I made the right choice 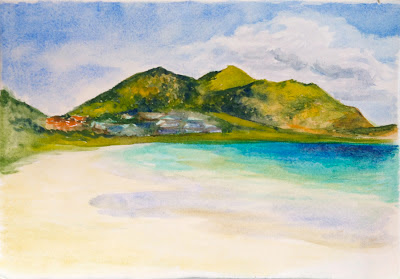 Orient Bay, 2012, watercolor on paper, 6 3/4 x 10 inches
I have never considered myself a watercolor painter, I have always shied away from it because I have never been able to control the medium. I've always had runny incidents, and the idea of doing plein air watercolors intimidated me! I'm always up for a challenge though, and so I forged ahead and after my first watercolor I was hooked! 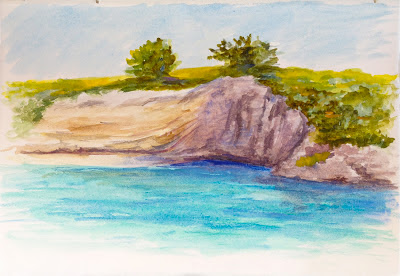 Cupecoy Beach Cliff, 2012, watercolor on paper, 6 3/4 x 10 inches
I became so excited about watercolor that I wanted to pop out my sets every chance I could get. The top three landscapes were done in the beach where my resort was located, a place called Orient Bay, a place the locals recognize as having the most beautiful beaches. In my opinion all of St Maarten has beautiful beaches, it is a place surrounded by crystal clear, turquoise blue water, it was truly heaven on earth. Orient Bay beaches may be beautiful but nothing compared to Yellow Beach, on the little Pinel Island, which can be seen across the bay on the second watercolor above. That place was peaceful, and there were no waves, which made it feel like I was swimming in a shallow blue lagoon. 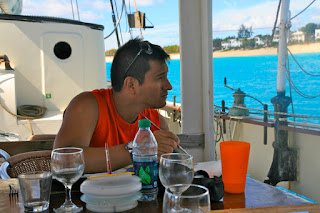 In the photo above I'm at work aboard the sail boat Passaat, and as you can see in the background, I am not lying about the color of the water! The Passaat anchored right off Cupecoy Beach and the cliff across the water was begging to be painted. Of course it had to wait a bit for me to be done with my swim around the about, which provided snorkeling gear to get close to the schools of fish swimming around.
In all, my trip to St Maarten was a great experience that not only allowed me to get acquainted with another culture, but also allowed me to shed my fear of watercolor painting.
Posted by Luis Colan at 10:31 PM 3 comments: Links to this post