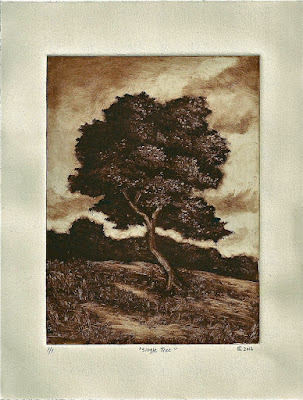 These are the most recent monotypes created during the Salmagundi Monotype Parties in March and April.  As always these can bee challenging to make due to limited time, but they are even more fun to make than anything else.  I am offering these, and many other monotypes, on my Etsy shop.  Unlike paintings, these prints are more affordable, and they are still one of a kind images.  So what are you waiting for, get yours soon! 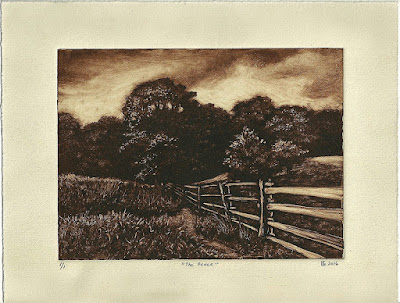 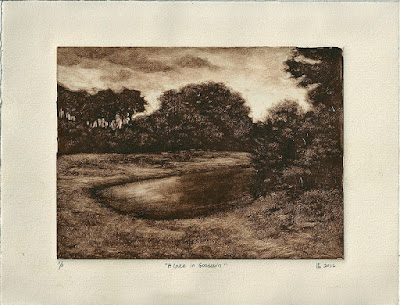 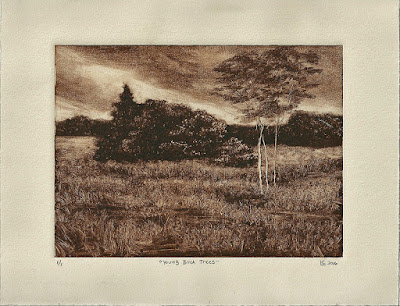 Posted by Luis Colan at 1:01 PM 2 comments: Links to this post 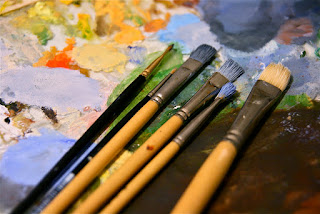 I have been working on the large landscape I began in January, and although I have managed to get a lot done in a short amount time there is still plenty more work to do.  What has been taking me long are the clouds, I have been obsessing over them, trying to get them to feel natural and with some color variations in them, but at the same time retaining some of the cool darkness. 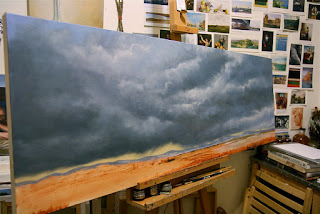 At this point in the painting (pictured above) I thought I had a break through and was happy with that night's work.  Looking at it the next day I felt more needed to be done, but I know I was in the right path. Something was coming to the surface, textures were building up and the looseness of the paint application was more apparent.  There are few things I'm doing different with this painting, to start with, the size and format of the canvas.  As I had mentioned before I have not painted this large in over twelve years, and the panoramic format brings a lot of challenges that one does not come across a regular rectangle.  The linen I'm using has more texture which has made use larger hog bristle brushes to be able to create some texture.  I normally use smoother linen with small sable brushes, and that has worked perfect for me with the smaller work, but this is a whole other beast and I needed to switch up my routine. 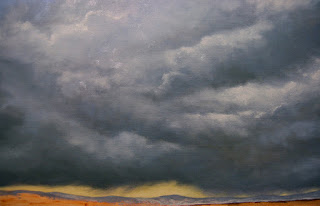 This is a close up of the mid section showing the clouds, which have been developing organically.  Things take shape as I work and move paint around.  I have been looking at Constable a lot, his buildup of paint and surface has been the one thing I have been after.  In his clouds he was able to capture movement and light, there is a lot of energy to his brush work and I'm trying very hard to capture some of that. 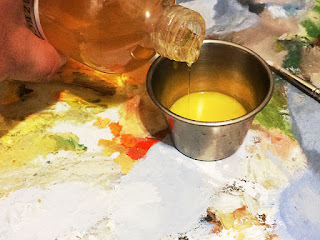 Recently I became obsessed with a show from the BBC, Fake or Fortune, and in it leading connoisseurs and art historians try to authenticate lost works of art by masters.  There is a lot of research involved, provenance is traced back to the creation of the works and each painting goes under scientific analyzes.  In one of these episodes two paintings by John Constable were featured.  In this episode the conservator mentions the fact that Constable used egg whites with his oil paints, that's why his whites have a chalky aspect.  The use of egg whites or yolks in oil painting is not a new idea, it's a practice that goes back centuries but it's not commonly seen.  I've read somewhere that it is believed that Rembrandt may have used egg yolk or other type of protein to create textures in his canvases.   After hearing that bit of information about Constable I decided that night to crack and egg and mix it with paint.  About two years ago I attended a weekend workshop with the George O'Hanlon and Tatiana Saytseva of Natural Pigments.  I saw firsthand how Tatiana mixed pure egg yolk with premade oil paint and automatically the mixture thickened to form an impasto like paint.  Being an art materials geek, I was mesmerized! 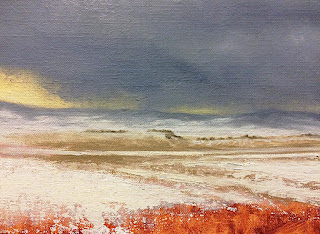 Just to make sure I was doing the right thing, that night I went online to see if I could find more information about this.  I don't want to run into any problems in the future because I acted on an impulse without having the necessary knowledge.  I found different types of recipes, most were the traditional egg oil emulsions which makes oil paints workable with water.  This is more of an egg tempera application, which is not what I was after.  I finally found a simple recipe which call for equal parts of stand oil and egg yolk.  I have been using sun thickened linseed oil for this painting and used that instead, not that it matters much since both stand and sun thickened oils are made of linseed, just a different process of polymerizing them.  But I like to keep consistent so sun thickened it was.  The thought process behind the yolk and oil mixture was that the paint film would be a little more flexible as it ages due to the oil.  Yolk alone might prove to brittle the paint latter on, at least this is the problem that another painter online encountered.  I used the mixture as a medium with Lead White, which was too transparent and I needed it to become more thick and "chalky" like Constable's white.  After a few minutes the mixture began to set and the lead white became fuller and more opaque, and I was able to use a palette knife to spread it on the linen, giving me the opacity and texture I was looking for.  Because the yolk acts as a drier and lead white is a fast drying pigment on itself, it was imperative that I use this mixture on the first layer, and not in between because the different drying rates of the oil paint layers could cause this whole thing to crack in the future, and as Whitney once said, crack is wack!

I have continued work since the egg yolk night, I'm actually getting more details done in the landscape bellow.  The image above is a three picture collage of the painting as it looked last week.  Progress is going steady and more has been done on the foreground.  I'm finally starting to see this thing come together nicely.  More to come.

Posted by Luis Colan at 4:23 PM No comments: Links to this post