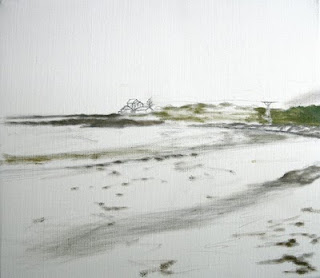 I'm back to work in my new studio. Things are moving at a slow pace for the moment, but I'm happy to be back at work. I began a new painting last night, a landscape of Kennebunkport Beach in Main. The image above shows the very first lines of the composition. I tried putting to use the new technique I learnt in last week's workshop, but I'm too impatient to deal with the required first steps. After I had a quick sketch done, I started going over some of the lines with paint instead of a micron pen. 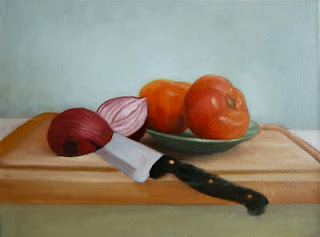 This still life is coming along nicely. All the shapes have been blocked in, now it's a matter of building up paint and fine tuning the shapes. I'm still not sure about the pale green background. It's not bothering me a whole lot, but it's also not wowing me! More to come in the next few days.
Posted by Luis Colan at 9:47 PM No comments: Links to this post 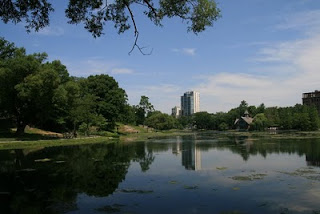 On Saturday, June 5th, I took part of a plein air workshop in Central Park with Bennett Vadnais. With rain in the forecast it was decided that the show would go on, and so we met at the northeast corner of the park. This workshop was designed to show us Bennett's technique, a five step process I was not used to in plein air painting. 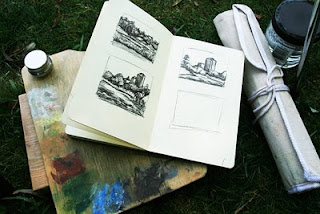 We were to walk around and make some thumbnail sketches of possible subjects. I immediately fell in love with the building on the other side of the lake, and no matter how far I walked with my sketchbook, I kept going back to it. After three quick sketches I decided this would be it. 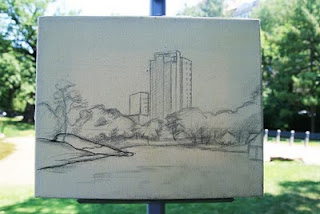 After we chose our scene and the thumbnail depicting it, we had to draw the composition in pencil on the canvas, blocking in major forms. 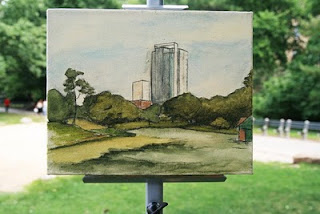 Once the shapes were blocked in with pencil, inking began. We had to go over each outline with a micron pen, or any waterproof pen, to make our drawing more permanent once paint and solvents were laid on the canvas. The first layers of paint were transparent washes of transparent pigments and galkid lite. I hardly work with transparent colors such as phthalos or quinacridones, I find them to be too intense and unnatural. Once all these different components were set in place, the real fun began. 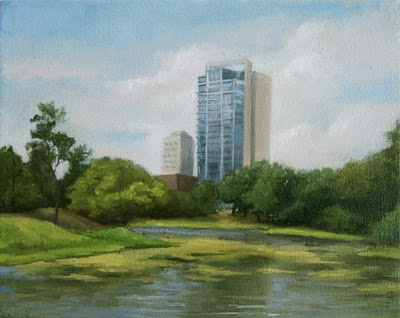 Central Park North, 2010, oil on canvas, 8 x 10 inches
In time I got a handle of the transparent pigment palette and I was able to make them work for me. From 11 a.m. to about 6 p.m. I worked on this little painting. In that amount of time, in the past, I have completed two paintings, but this process was so involved and detailed that it took twice the amount of time. None the less, I enjoyed the process and I may keep working this way.
Posted by Luis Colan at 4:16 PM No comments: Links to this post