Drawings from the Met 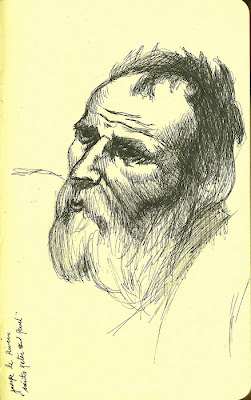 Detail from Saints Peter and Paul after Jusepe de Ribera, 2012, ball point pen in moleskine sketchbook
Weather if it is painting in the studio or plein air, there's nothing else I enjoy more than to visit the Met and spend time drawing from the works on display. This set of drawings is from my last visit a couple of weeks ago, as always I have fun doing these while doing a little bit of learning at the same time. 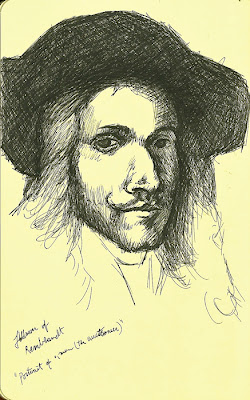 Portrait of a Man (The Auctioneer) after Follower of Rembrandt, 2012, ball point pen in moleskine sketchbook 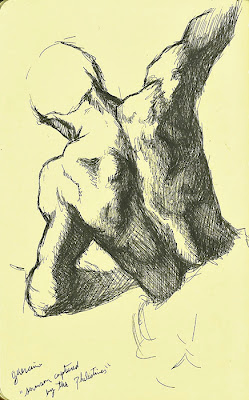 Detail from Samson Captured by the Philistines after Guercino, 2012, ball point pen in moleskine sketchbook 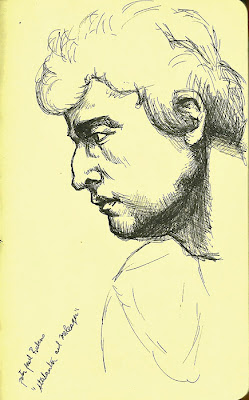 Posted by Luis Colan at 7:46 PM 2 comments: Links to this post 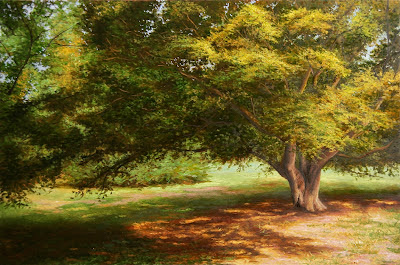 Oak Tree, Rhinebeck, 2012, oil on linen, 12 x 18 inches
Hot out of the oven and right on to the display case...that comment really makes me wish I knew how to make bread, but in this case we're talking about this new landscape painting. The oak tree is not any random tree, it happens to be located in the grounds of the Vanderbilt Mansion in Rhinebeck, New York...can you say "fancy tree!"? I looked through my photo archives, and I have many reference photos, and painting this tree happened naturally. When I was there in 2010 I was taken with the lushness of the tree and the way the sun was hitting certain areas on the top and creating interesting shadows on the ground. I took a few shots and always had them in mind, but it wasn't until I got a hold of an odd sized linen that everything fell into place. The proportion was perfect for the way I wanted to paint the tree, and not before long I was off to a great start. I approached this painting in a similar way to Goodwin, using almost the same palette and alternating between glazes and thicker paint applications. The only difference is that there are more warm light tones in this. Unfortunately the natural light in my studio and the camera didn't help to show the subtleties in the painting, especially in the dark areas, which are not as dark as they appear in this photo. In the next few days I'll try to take a better photo, for the moment this will do.
Posted by Luis Colan at 8:58 PM 6 comments: Links to this post 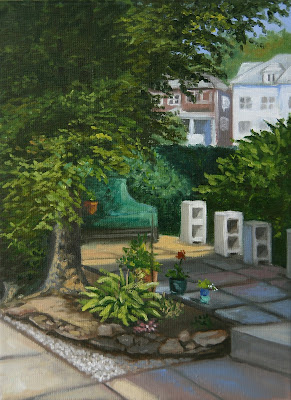 Mom's Patio, Connecticut, 2012, oil on linen, 12 x 9 inches
I made a quick one day trip to Connecticut yesterday to be there for the birth of my first niece. Yes I'm an uncle to a healthy baby girl! I didn't have much time to explore areas near my parents' home for some plein air painting, so I set up shop in their back yard and painted my mother's sitting area, tucked away in a little corner in the back of the house. I needed to work quickly and more painterly...I'm still not sure how I feel about it but I do like the sense of light and shadows that made it to the painting. More to come.
Posted by Luis Colan at 4:17 PM 2 comments: Links to this post 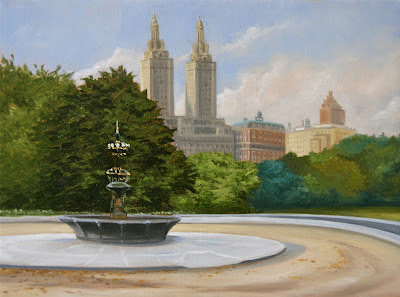 Cherry Hill Fountain, 2012, oil on linen, 9 x 12 inches
I went out to Central Park on Friday, it was unplanned and I think it worked out for the best. It was a hot humid day, but I didn't mind, it seemed like it was the right day and time to be there. In this painting I revisited a subject I attempted to paint on my second plein air ever back in 2009. Back then I was happy with it, but as the years go by I dislike it more and more. This is the first take of San Remo of 2009, compared to the painting I did this weekend I say there have been some major changes happening! In the next few weeks temperatures will start to cool making it more pleasant to paint outdoors.
Posted by Luis Colan at 10:38 AM 1 comment: Links to this post 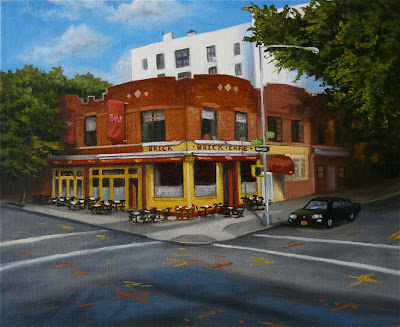 Brick Cafe, 2012, oil on linen, 9 x 11 inches
Welcome to Astoria everyone! Brick Cafe, a french style bistro located on the corner of 31st Ave and 33rd St has been a favorite eatery for many locals, and you can't blame them, the place has good food, affordable prices, friendly service, and a cozy rustic space. I know I'm starting to sound like some sort of commercial, but this has been one of my favorite places to eat in Astoria, and it doesn't hurt that I live less than a block away! I have always enjoyed the vibe of the place, and it's great to see people sitting outside in the summer enjoying pleasant conversations over food and wine. The decor of the place has always been to my liking, for a while I was on the search for a rustic wood dinning table that would be similar to theirs because I felt that's what a well put together kitchen/dinning room should look like. The exterior has always been colorful as well, and as a painter anything with color has always attracted me. It has always been on the back of my mind to paint this place, but always put it off because it sits on a busy corner. I couldn't put it aside any longer and one afternoon I walked right over and painted in the warm afternoon sun. Just as I thought, this busy corner brought a lot of onlookers and people who were pretty much breathing down my neck. It's just one of those things that come with the job I guess. Regardless of the nice afternoon and the nice light and colors in front of me, this turned out to be be a difficult painting. I'm not a fan of architectural perspective, and this two point perspective painting proved to be challenging. Not to mention that there were more little details than I expected to find, but after a long session and a few touch ups in the studio I think this turned out to be a nice little painting.
Posted by Luis Colan at 7:49 PM 1 comment: Links to this post