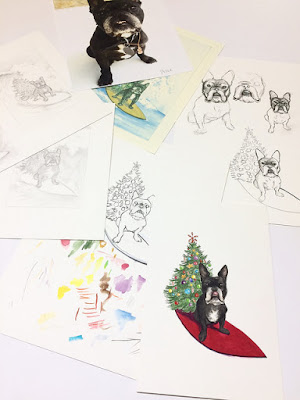 Last summer I wrote a post about a commission I had been given to execute a watercolor design for a Christmas card.  This year I have been commissioned again by the same clients and I have been working hard to deliver the image they have in mind.  The commission changed a bit last year to include a portrait of the clients' French Bulldog Peter.  This year we are sticking to the same theme with more of a focus on him. 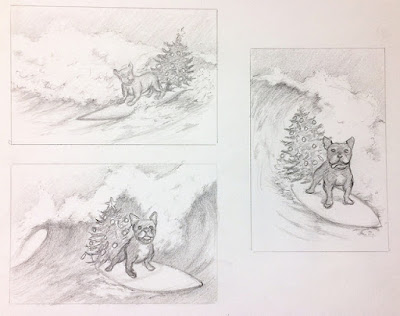 The idea is to have the little Frenchie share a surfboard with a Christmas tree while riding a big wave. 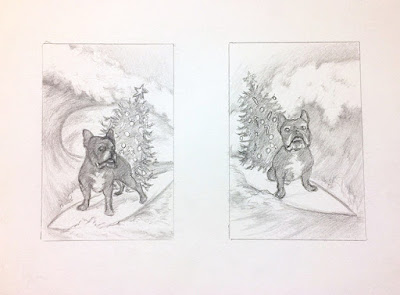 The pencil sketches above are the preliminary compositional sketches to determine what would work best.  It was decided that I should combine these last two sketches into what would be the final image. 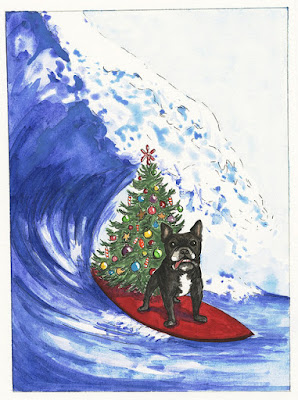 This is the first take in full color.  I'm very proud of this wave, I looked at Japanese wood blocks for inspiration and I think this has some of that essence. 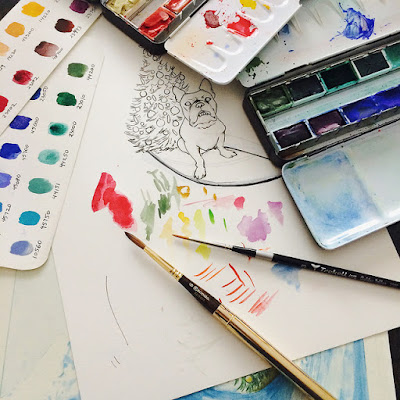 Moving on to a second take.  Changes needed to be made to the dog, but thank God for the magic of Photoshop I did not need to recreate the wave.  I only had to paint Peter, the tree, and the surfboard and they will get dropped in to the image of the wave. 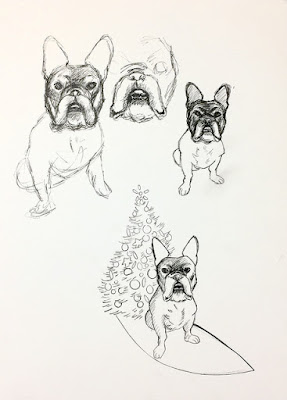 I just finished working on the third take, more changes needed to be done to the dog.  I had to make a few more sketches to be able to get it right. 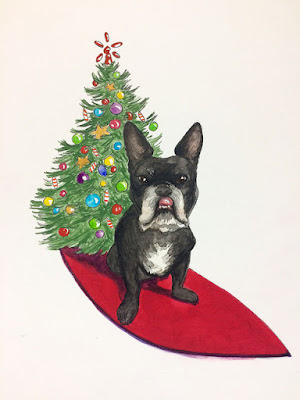 This is the third revision on Peter and I believe this will be it, cross your fingers that this is it!  I will be submitting this image for review on Tuesday, let's hope I meet the clients' wishes.  Thank you for reading this blog and I hope your dog days of summer are splendid.
Posted by Luis Colan at 12:46 PM No comments: Links to this post 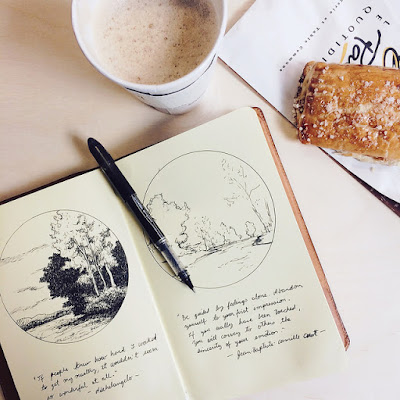 Ideas for prints and paintings keep flowing into my Moleskine sketchbook.  Seems like I have also begun to enjoy a sketching session with a nice cup of Joe and a pastry…how French of me! 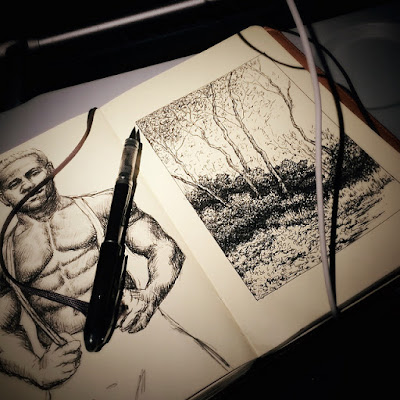 I try to sketch as much as I can, while sitting in the train, waiting at the doctor's office, in my down time at work, and even at a few thousand feet up in the air.  It's not a matter of when inspiration will hit, it's a matter of developing a work ethic and keeping the brain entertained and sharp.  My mom regularly says that the brain is another muscle of the body and that it needs working out just as much as your biceps.  And you know mom knows best. 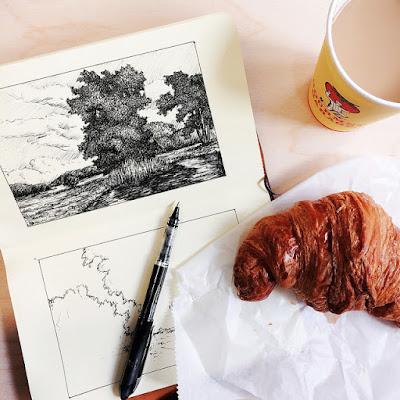 See, what did I tell you about the coffee and pastry?  This sort of thing can be problematic, specially in the sumer when you have to watch what you eat to be able to fit into that favorite bathing suit.  Can't wait until the fall and winter, this afternoon ritual will taste so much better with a slight chill in the air.


These are a couple of videos of a drawing in progress.  The second video was taken during my train ride to Connecticut…I never waist time. 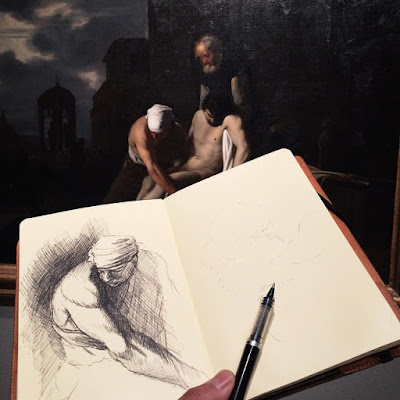 While I was in Connecticut this past weekend I visited the Wadsworth Atheneum Museum, a place I know well from my youth.  This is the place where I saw my first Caravaggio, my first exhibition on Caravaggio and his followers, and my first exhibition on Impressionism.    This museum has a lovely collection and it is hard not sketch some of the paintings in the galleries. 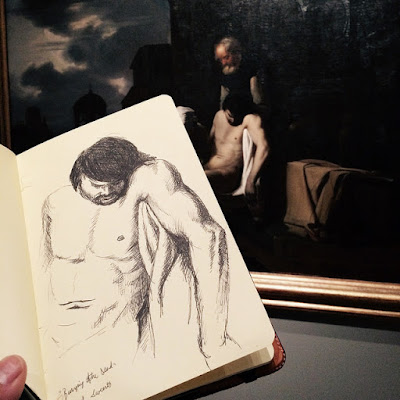 I'm trying to get better at sketching the figure using a pen, the last time I tried drawing from life using a pen I failed miserably.  For now I'll stick to sketching figures from old master paintings, the models will hold the pose for ever and I can take my sweet time trying to figure things out.
Posted by Luis Colan at 12:41 AM No comments: Links to this post

Sunday at the Park 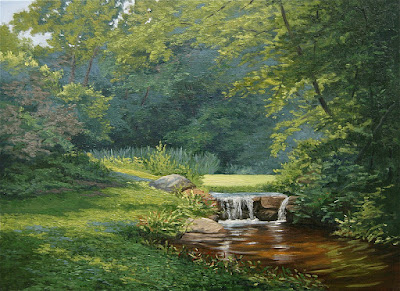 Sunday at the Park was a great Broadway show, Jake Gyllenhaal did a great job playing the obsessed role of George Seurat, but this is not a post about that show.  I'm here to talk about my Sunday at the park (Prospect Park) experience and my own obsession with capturing this landscape. 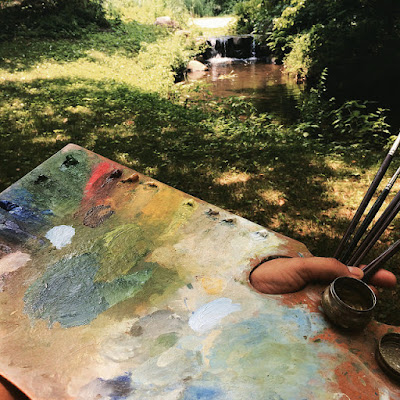 It's hard to believe this was my first time going out to paint this year.  There have been too many distractions in the weekends, I was beginning to get impatient about going out there to get some work done.  Finally I took my chance and blocked out this past Sunday as my painting day…no distractions please! 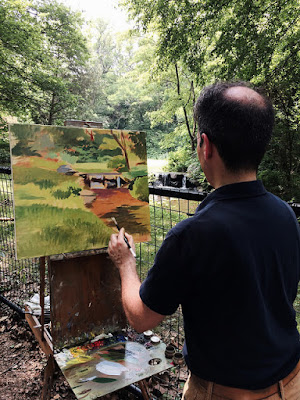 As always Charles joined me, unlike me this guy does not get distracted, he works hard and is constantly drawing and painting.  The idea was to paint a waterfall that was secluded from the main parts of Prospect Park, but upon finding the spot we were so angry to find out that the park has been fencing off many areas that used to be open, such as the little rivers and streams.  We made our way down following the water towards the main lake and found this spot with a lower fence.  We could set up right on the fence and be able to look over it.  This waterfall was smaller than the original one we intended to paint but it was nice none the less. 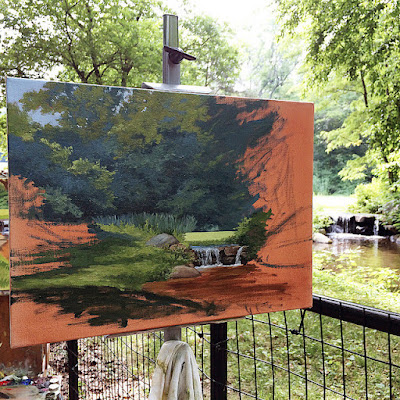 Sunday was a hot one, temperature reached almost 100 degrees and humidity was high.  It was so hot my oil paint was melting and running on the palette, there was no need for medium since the paint was liquifying.  But we are no strangers to this sort of climate and so we pushed along until about five in the afternoon.  I was able to cover most of the canvas by the time we were done.  The image above show the painting half way done, this may have been around 2pm. 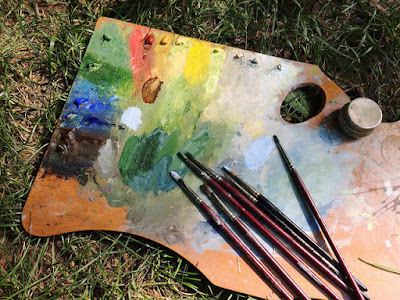 My handy dandy palette, how I have missed putting it to use.  It was like seeing an old friend without missing a beat. 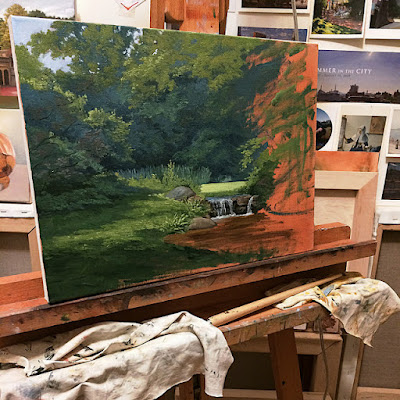 This is what I was able to get done in the five hour session.  Not bad considering the fact that I felt like I was melting.  Last night I stayed up late and finished this painting which you can see at the beginning of this post.  I can't wait to get back out there, stay tuned for more paintings.
Posted by Luis Colan at 12:34 PM No comments: Links to this post