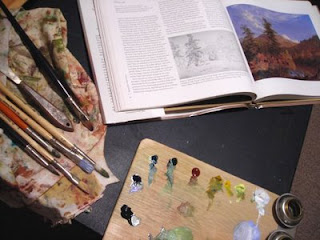 Think I may have caught Landscape fever! After painting a nice little scene at Central Park on Tuesday, I came to my studio to work on yet another landscape. 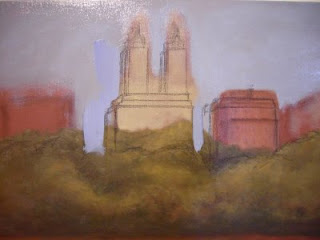 Working from a small study and a digital picture, I began to notice that I had made some mistakes with proportions. Changing a painting can be hard for me, even in the early stages. But I want to do this one right, and with a litho pencil I started correcting the areas that weren't working. After a few lines were added I began to add blue to the sky. This is the most important part of the painting because the value of the sky will affect the values and temperatures of the other elements in the painting. 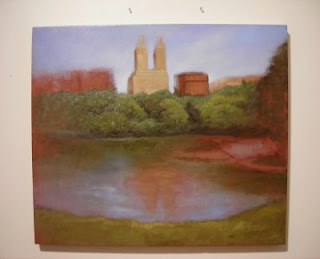 After a few hours that lead me right into early Wednesday, this landscape began to take shape. I'm still working out the temperatures between the sky and the back row of trees. I'm having difficulty working with Williamsburg's Sap Green. Outdoors I paint with Old Holland's Sap Green, a beautiful, semi opaque green. Williamsburg's Sap Green is more transparent and more of an electric green. I think this color might be made with a Phthalo Green, since it's tinting strength is almost unforgiving. I will let this last layer of paint dry and rework some of the greens with a cooler tone. So far I'm enjoying working on this piece.
Posted by Luis Colan at 1:18 AM No comments: Links to this post 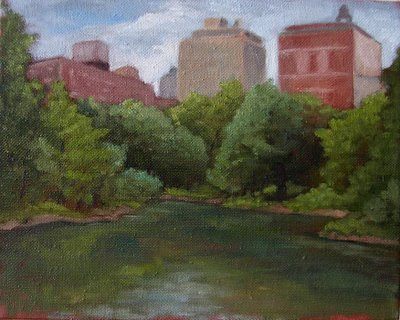 The Pool, 2009, oil on linen, 8 x 10 inches
It was one of those iffy days. It was overcast all day yesterday and we were expecting rain during the night. It was anticipated that we would have a dry morning today, but that it would start raining in the afternoon. When I made it to Central Park the sky was very gray and it seemed that rain would start coming down at any point. What to do if I you get caught in a downpour? Would you save your painting? Your materials? Or would you leave it all in search for shelter? I has hoping it wouldn't rain, and by the end of the session the sky cleared and the sun beat down on me, burning my arms as I painted. Changing light causes problems while working outdoors, at times the middle building looked yellow, then it changed to a light gray, then to a dirty yellow, then to a darker gray. The sky changed the most but it was easier to capture it for some reason. My approach was a little different today, instead sticking to an earth tone palette, I started incorporating Sap Green, Viridian, Nickel Yellow, and Ultramarine Blue. The small change in color made a lot of difference, one which I'm very happy with. I now have to focus on drawing, crucial to cityscapes. Decisions have to made quickly, how detailed do I want the buildings and are they the main focus? Still working on it, but for my fourth plein air painting I say this is not too shabby.
Posted by Luis Colan at 4:27 PM No comments: Links to this post 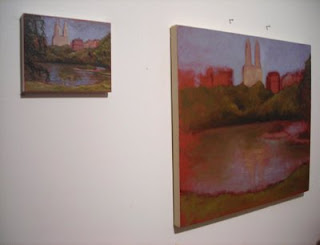 I have begun a large painting, a second and more finished version of a little study of San Remo. 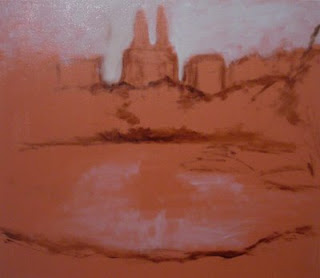 I'm starting with an earth tone palette. I have come to enjoy working this small color choice, and I'm trying to see how far I can take it. Later on I will add more color to accent a few places. But the main goal is to use mostly black, yellow ochre, red ochre, and white. 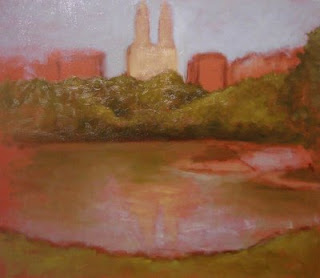 So far I'm happy with the first layer, the greens are looking nice and the space seems right. I will keep working on this painting for a little while, and will keep updating this blog with it's progress.
Posted by Luis Colan at 11:23 PM No comments: Links to this post 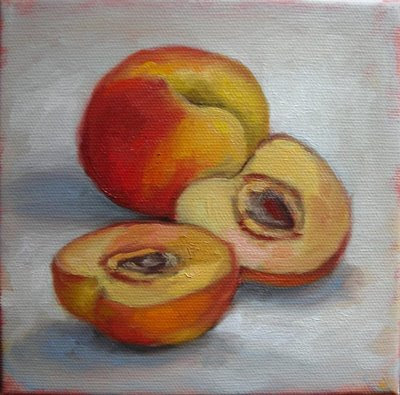 Peaches, 2009, oil on canvas, 6 x 6 inches
Thought I do a little painting of peaches. It's been a while since I've done one of these "painting a day" exercises, and it was something I needed to do. This was also a good way of putting Sennelier oil paint to the test. Recently I was given a sample tube of their paint and thought why not? Sennelier has reformulated their paints, all pigments are now ground in safflower oil. I was surprised to find out this paint was very intense and it was so smooth and buttery. It was a nice contrast compared to the stiff, yet excellent paints by Williamsburg and Old Holland.
Posted by Luis Colan at 8:19 PM No comments: Links to this post 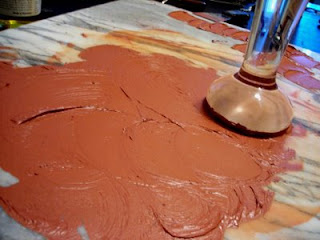 The other day I started preparing two large canvases. I had sized these with rabbit skin glue a few months ago and it was time to put down a ground. I find it funny how I'm always stretching, gluing, and laying down grounds for "future" paintings, but I don't get to them. I don't paint as much as I used to. It comes and goes, but on Monday I realized that we are at half of the year and I haven't done much painting. At least nothing significant. 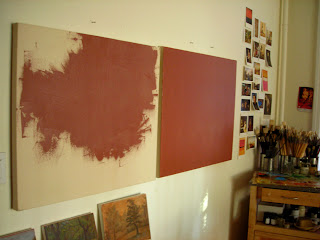 With that in mind I was determined to start work on larger pieces. I intend on enlarging some of the landscape studies I have been doing in Central Park. I already have in mind which will be the first to get flown up. I have also realized that I'm getting in the habit of starting paintings but never finishing them. I have four laying around in my studio and sometimes I wonder how much longer am I going to ignore them. Maybe it's time to get serious and finish them.
Posted by Luis Colan at 11:56 PM 2 comments: Links to this post 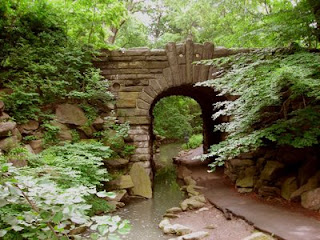 Finally the day came! Because of bad weather, especially on Tuesdays, I hadn't been out to paint in Central Park for three weeks. We did experience some showers last night and was hoping class wouldn't get postponed until next week. That would have been a bad joke. But the sun did peek through during the overcast morning, and along with Rob and Andrea, I set out to paint in the Ravine of Central Park. It was a no brainer that I should paint this bridge after being brought to there. 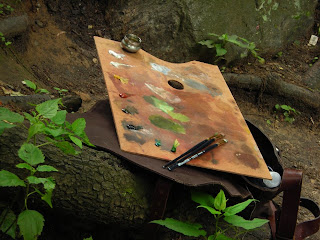 With my palette ready and brushes handy I dove right into it. I wasn't sure if I would be able to capture the scene but I was up for the challenge. I think I had some built up anger from missing class for so long that withing a few short minutes of painting I had nailed down the composition and proceeded to start building the paint. 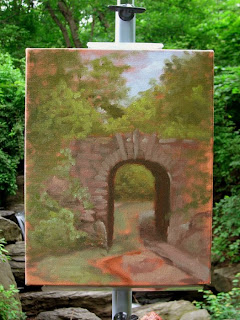 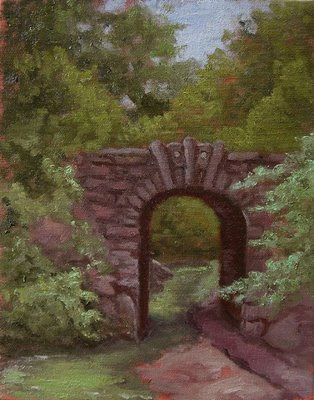 The Ravine, 2009, oil on canvas, 10 x 8 inches
I did what I could under limited time, but I'm very happy with the product. There are things that could be tweaked, but this is a landscape study, not a "finished" piece. Perhaps I'll save those changes for when I enlarge this painting, well that's if I ever get to it.
Posted by Luis Colan at 9:55 PM No comments: Links to this post