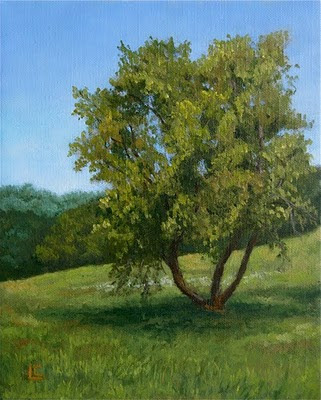 Pleasant Valley, NY, 2010, oil on linen, 10 x 8 inches
A group of friends and I took a getaway trip to upstate NY this weekend. On the first morning I walked around the area hoping to find a corn field we had passed by car the day before. I didn't find the corn field but I did find a baseball field, and next to it this open space with a beautiful tree. 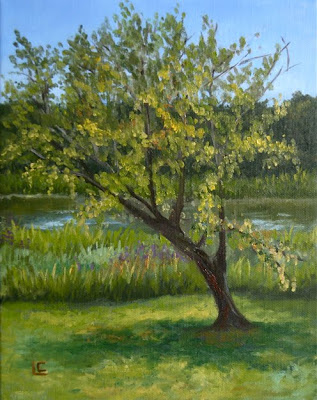 Backyard, Pleasant Valley, NY, 2010, oil on linen, 10 x 8 inches
This painting was done behind our rental house. The backyard was a great open space with a big pond right behind. The light in the Hudson River Valley area was incredible, the sun reflecting off the trees and barns was an incredible experience. I have the itch to go back for more!
Posted by Luis Colan at 6:44 PM 4 comments: Links to this post 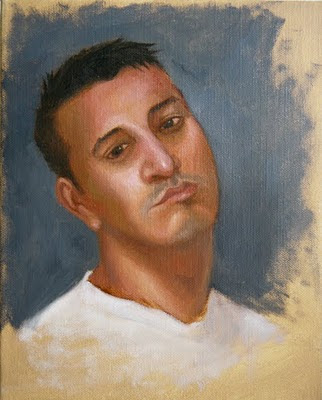 Self Portrait (first layer), 2010, oil on linen, 10 x 8 inches
I am not one to do self portraits, as a matter of fact the last time I painted one was ten years ago! Why start now? Disillusion after finding out that summer classes at the League were over last week is what drove me to look at my self in the bathroom mirror for three hours. I wanted to paint a portrait, that's what I got ready for, and since there was no class and no model, I subjected myself to pose for myself. I admit it was very strange to see me develop on canvas, but at the same time I was surprised to see all the things I've learned come to play nicely in this self portrait.
Posted by Luis Colan at 11:07 AM 1 comment: Links to this post

Back to the League 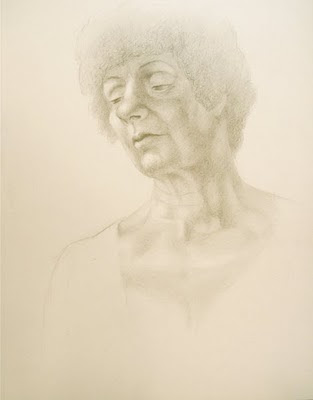 Julie, 2010, pencil on paper, 18 x 14 inches
For the month of August I'm back at the Art Students League. My last class there was in 2007, since then I've been wanting to go back and finally I did but not sure for how long. Above is last week's two session pose. Tonight I'll give painting a shot.
Posted by Luis Colan at 11:15 AM No comments: Links to this post 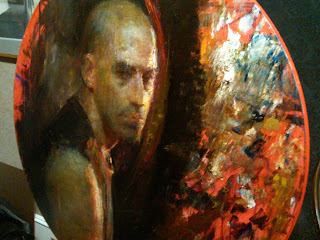 Two nights ago Steven Assael held a portrait painting demo at the Salmagundi Club. I have admired his work for some time and this was not to be missed. I didn't know what to expect, as usual though, there was large crowd trying to get a glimpse of the artist at work. 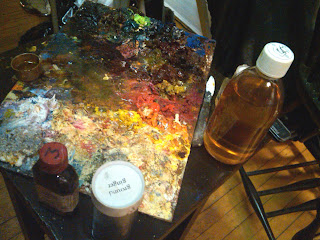 Surprise one was his palette set up, or lack of. Huge blobs of old and new paint took up most of the space. How can someone work like this, with no room for mixing or for even to see the actual colors? This isn't the first time that I've seen a messy palette coming from such a great painter though...at the Salmagundi Club, behind glass, one see appreciate the old, messy palette of George Inness. 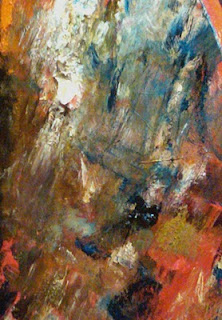 Here's where the action happens, on the painting itself! On the top right edge of the circular canvas Steven Assael mixes his colors, a practice that he has in common with Christopher Pugliese. 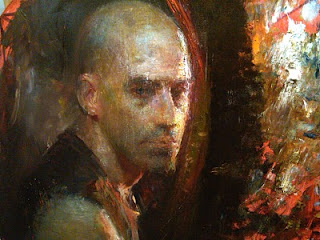 This is the portrait midway through the second day of painting. There's a beautiful build up of paint, textures achieved by a quick hand dropping color and moving it around. Surprise number two came at the beginning of the session when Mr. Assael, in a Pollock like manner, started lashing and sprinkling oil/painting medium on the surface. Some of those drips are still visible in this picture I took during one of the breaks. I've heard of "oiling out" before, I always thought it was an even thin application of oil throughout the painting surface after some paint had dried. His way was not even or thin, but whatever it was it works for him.
Posted by Luis Colan at 5:56 PM No comments: Links to this post

Landscapes from The National Gallery II 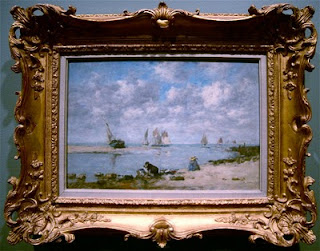 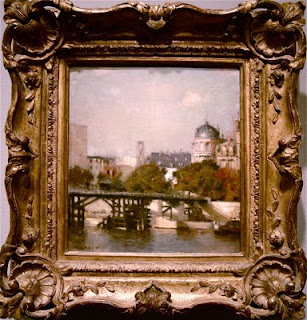 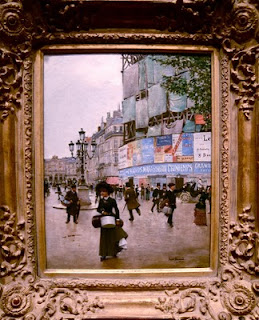 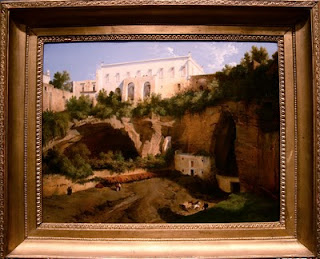 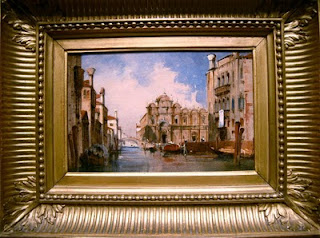 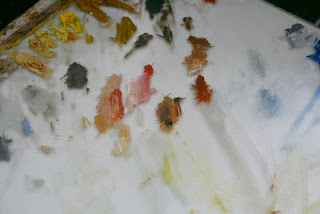 The unbelievable summer heat we've had in the North East has finally passed, or so it seems for the moment. It's the middle of August and summer is coming to an end; it has been a fast one, and I wish I could say it's been a fun one too. Many things I had to take care of got in the way of summer loving and sumer blasts. With all that behind I resume work in the studio, picking up unfinished pieces from the floor on to the easel. 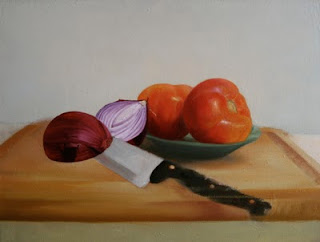 I am forcing myself to finish this painting first. I think I've dragged it out long enough. I've been painting on panel and very smooth linen, and going back to cotton canvas is a little strange. The surface is a bit rougher, and I have to layer more to get the effects I want. Been doing more glazing, using Indian Yellow and Alizarin Orange has helped punch up the intensity of my colors. The onions in this painting seem like paper cut outs, I know, but this is only my second pass on them. They will be more integrated to the painting tonight. 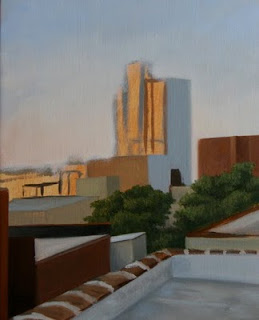 I have been having fun working on this painting of Astoria rooftops. Using a nicer smoother linen than usual, and also using Galkyd lite. I'm not a big fan of Gamblin's products, but after being turned into Galkyd in Bennett's workshop I got to see how useful this medium can be when painting outdoors, or when fast results are needed. Not my favorite medium but it does the trick so far. More to come soon.
Posted by Luis Colan at 1:26 PM No comments: Links to this post 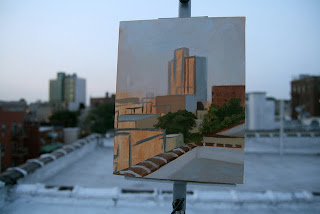 I've been wanting to paint on my rooftop for a while. Even before moving to my new place two months ago I knew I wanted to do a couple of paintings from here during the summer. Inspired by the landscapes from the National Gallery, one late afternoon after work I, took all my supplies up 3 flights of stairs to paint what remained of the day. It was great, standing from this spot I get a view of the north of Astoria, a little to the right I can see the Triborough Bridge (now the RFK Bridge), and further right I have a view of Manhattan. At night, when the city lights are on, this roof can be quite magical. Above is a shot of one and half hours of work...shifting light can be very fast at this time of day. Summer is coming to an end and I'm not sure how many more bright afternoons I'll have before I can finish this painting. I will be working on this in and out of the studio. Let's see how this turns out later.
Posted by Luis Colan at 2:03 PM No comments: Links to this post

Landscapes from The National Gallery 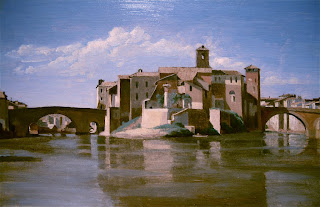 Jean-Baptiste-Camille Corot, French, 1796-1875, The Island and Bridge of San Bartolomeo, Rome, oil on paper on canvas, 1825/1828, The National Gallery of Art, Washington, D.C.
I recently took a trip to Washington DC for a weekend getaway. The town is beautiful, but the biggest treat about going to DC is always The National Gallery. It houses some of the greatest works of art hung in a maze of endless rooms. I spent two days there and I still have yet to get through it all. 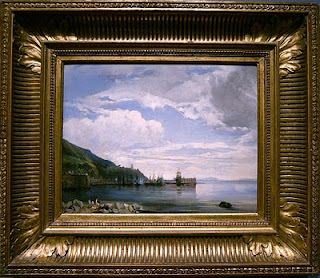 Leon-Francois-Antoine Fleury, French, 1804-1858, On the Bay of Naples, oil on paper, c. 1830, The National Gallery of Art, Washington, D.C.
I did get to see some gorgeous landscapes, which was number one on my list "To See." Here's a small sample of the landscapes found in their Small French Paintingssection in the East Building. 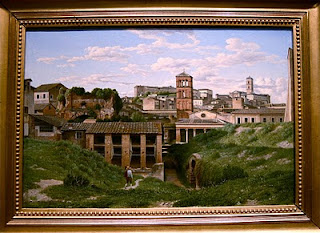 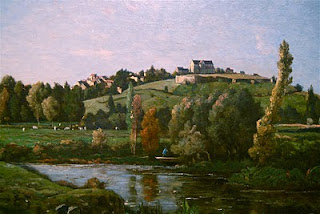 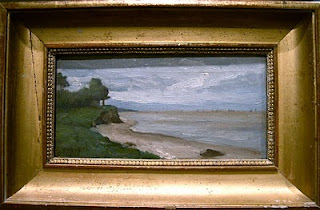